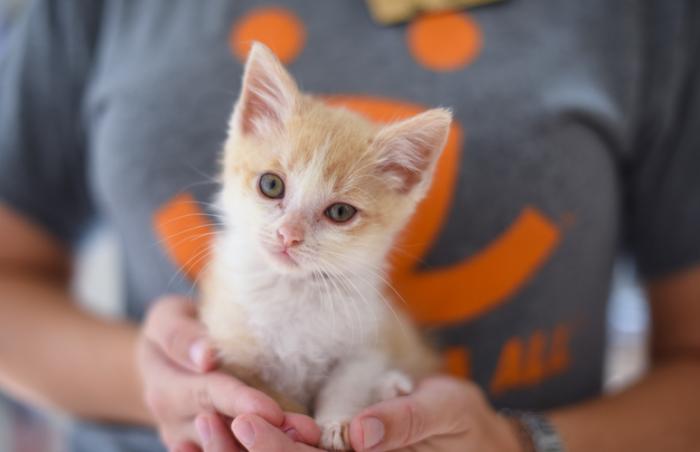 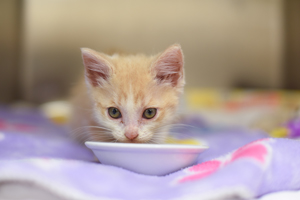 As he leaps and bounds across the room, Topeka shows no sign of the critically ill kitten he once was. A fluffy, orange Creamsicle-colored ball of energy, the tiny two-month-old looks ready to take on the world. But just four weeks ago, Topeka arrived at Best Friends Animal Sanctuary barely clinging to life.

Topeka was one of a litter of kittens born to a young mother struggling to feed them, and by the time she arrived at the Sanctuary, Topeka was the only kitten she’d managed to keep alive. Severely malnourished, sick and unresponsive, Topeka was treading the line between life and death, and his future looked grim.

Caring for a kitten in dire need

The Best Friends veterinary team and Cat World staff immediately swooped in to stabilize Topeka and to get him some much-needed nutrition and TLC. It was clear that if he was going to make it, Topeka would need round-the-clock care. He’d spend his days in the Cat World veterinary clinic, and at night he’d go home with a staff member who could feed him, keep him clean and warm, and give him the love and comfort he so desperately needed.

Cat World caregiver Danielle Barnhart didn’t hesitate. She knew bringing Topeka back from the brink was going to take a lot of work, but she, like everyone else, believed in him. As sick as he was, she could see his spirit and his will to live. So she swaddled him in a towel, took him home and got to work. 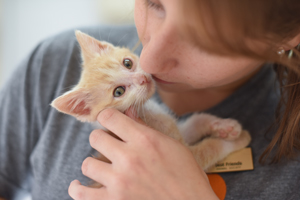 Danielle became Topeka’s surrogate mother, cradling him, feeding him through a syringe and sleeping close by him. It didn’t take long for him to respond, and soon he was transformed. “He didn’t move around much that first day,” Danielle recalls. “He would just lie there. But the next day he got more active and brave. The day after that, he was running around, and he’s been like a little lion cub ever since.”

Now, Topeka is thriving. He wants to investigate everything and is afraid of nothing. He’ll launch his tiny body through the air to pounce on toys twice his size, and he’ll run right up to the pen that houses Danielle’s rabbits, who are also much larger than him. Soon, he’ll be paired up with another young kitten, so he can learn the social skills he’ll need to be a great feline friend and a perfect pet.

In just four weeks, Topeka went from being near death to being a feisty little kitten. “This is one of the most rewarding things I’ve done, for sure,” Danielle says. “Just seeing him go from so sad and sick to this,” she continues, as Topeka bounces across the carpet to stalk first the vacuum cleaner cord and then the brightly colored toy mouse she shakes at him. “If you’re thinking of fostering, and you have the time and the energy to commit to it, do it.”

As if to agree, Topeka races into Danielle’s lap and continues to play.