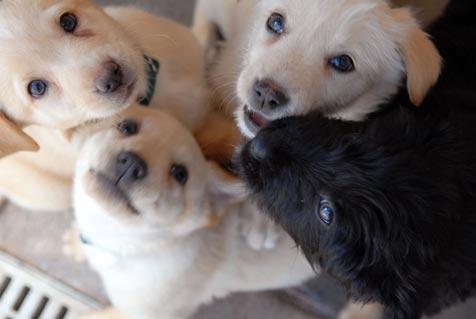 Saving puppies from being abandoned

Prospects for a happy life aren’t all that good when "home sweet home" happens to be the ground around a dumpster. Yet that was almost the fate of seven new Best Friends pups. They were from a litter of nine puppies born in a rural part of Arizona where dogs are sometimes left beside dumpsters to fend for themselves. This time, though, luck was on their side.

Saving puppies from a precarious fate

Tom Corrigan of Fredonia Humane Society talked to the person whose dog delivered the nine pups. When Tom heard about the plan to drop the puppies off at the dumpster area, he asked if he could pick up all the puppies and mom instead. (The mom would be spayed.) The family agreed.

Several weeks later, it was time to pick up the dogs. However, the family had changed their mind a bit. They wanted to keep two puppies and didn’t want to let the mom go. Still, it was a big win. That’s seven puppies who found a second chance. Seven puppies who will someday be on their way to good homes, spayed or neutered.

Space opened up at the puppy area at Best Friends, so the puppies came to the sanctuary (Fredonia Humane and Best Friends often work together). Puppies everywhere are cute by definition, but these seven seem to have an extra dose of adorable going on. Everybody who lays eyes on this group breaks into a goofy grin and starts speaking in a high-pitched puppy voice. No wonder they were named after flowers: Willow, Poppy, Pansy, Rose, Iris, Lila, and Belle.

At six weeks old, they still have some time before they’re ready to meet the public in puppy class. Until then, they’re polishing their "puppy dog eyes" begging routine. Let’s just say this group will probably get more than their fair share of treats when their time comes!

Adopt a dog or puppy from Best Friends.