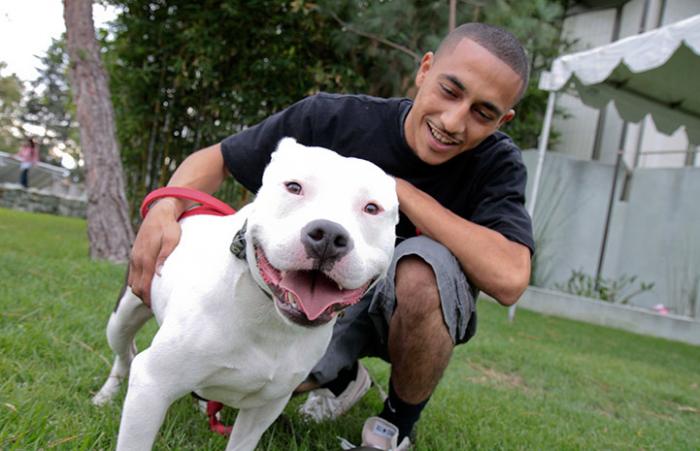 Perhaps the most telling figure from Best Friends' Los Angeles Fall Super Pet Adoption on Sunday is this: none of the cats that 11 shelters in the Los Angeles area brought to the event had to go back to the shelters. All 68 of those cats are now either in a home or in a foster home affiliated with one of the 39 local rescue groups that participated in the event.

"The cat tent was booming," says Jen Woodard, manager of Best Friends' Los Angeles Programs and instrumental figure in the organization of the event. "It was filled to the brim all day long." Another deeply satisfying figure is: of around 180 dogs that shelters brought to the Super Adoption, about 175 were placed in forever homes or foster homes. Best Friends is currently networking furiously to place the dogs who returned to the shelters on Sunday.

In terms of the number of animals taken from the shelter and placed in forever or foster homes, this was the most successful Los Angeles Super Adoption in the event's 11-year history.

La Brea Tar Pits Park, adjacent to the Los Angeles County Museum of Art, always serves as an advantageous location for the Super Adoption. According to Kari Harkton, Best Friends events marketing manager who manned the adoption check-out booth at the event, a lot of people who adopted hadn't even planned on being at the event. "There were a lot of drive-bys on their way to the museum, and walked away with a new best friend."

She says that a number of people came also because their friends and family had encouraged them to adopt. "A lot of people were surprised they found what they were looking for," Harkton says.

The first to adopt that day were Deandre Wilson and Jesse Brownhill. They decided on a one-year-old Chihuahua named Missy, a former stray they found at the Los Angeles County Shelter booth.

"We were looking to adopt from L.A. County because the animals there are the quickest [to be euthanized]," Brownhill says. "We felt it was the best deed." The couple is extremely happy with their pick, whom they've renamed Cinnamon. "She's the most cuddling, snuggling dog I've ever met," Brownhill says.

"Standard of what we should do" Since getting animals out of the city and county shelters was a top priority at this year's Super Adoption, Best Friends offered some incentives to that end to the local rescues that participated in the event. If a rescue took one or more dogs or cats from the shelter, it received a refund on their booth fees (worth $45 to $75) and six weeks of free training assistance from Best Friends' Community Training Partners program. Another huge incentive came from actor Katherine Heigl, whose Jason Debus Heigl Foundation offered $100 for each dog and $50 for each cat a local rescue pulled from the shelter that day.

Woodard thinks, however, that "had we not had the incentives, many of the rescues would have taken the animals anyway. We had put it out there that our goal was that no shelter animals would go back to the shelter, and the rescues heard us," she says.

Proof that the rescues heard the call came at the end of the event, when it was time for them to "bid on" the shelter animals they would take. There were, however, very few animals left by then, because the groups had already spoken for many earlier in the day, telling shelter officials they would take certain animals if they hadn't been adopted.

One of the local rescues to take an animal from the shelter was Coastal German Shepherd, a participating group in Best Friends' Network Charities, which managed to adopt eight dogs at the event. Co-founder and director of the rescue, Tiffany Norton, says her group was happy to take a shepherd, and would have done it with or without the incentives She thinks it's become a "standard of what rescues should do" at big adoption events involving shelter animals.

All in all, the event turned out to be a revelatory experience for Brownhill.

"I was really amazed to see all the rescue groups coming together for this one event," he says. "You don't really know how many organizations are in your community until you go to an event like this."

How you can help animals