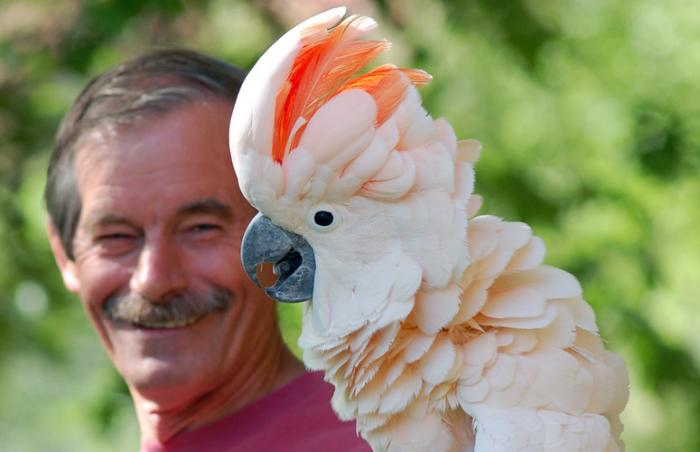 Seppi the Moluccan cockatoo gets a famously happy ending

No celebrity could travel through the town of Kanab, Utah, home of the Best Friends Sanctuary, and hope to have the same universal recognition — especially among kids — as one not-so-humble bird. You see, with any other celebrity there's bound to be at least someone who hasn't heard of them. But with Seppi the Moluccan cockatoo, that's pretty much impossible.

Everybody knows Seppi the Moluccan cockatoo 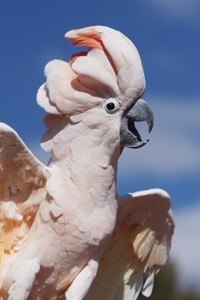 "I don't think there's a kid in the area who hasn't had Seppi in their classroom," says Best Friends parrot manager Jacque Johnson. Without question, Seppi has to be one of the most famous faces at the Sanctuary.

He's run for president twice (and has the campaign posters to prove it), he has a road at the Sanctuary named after him, he 'wrote' a popular column in the Best Friends magazine, and he's been on more outings to schools, hospitals, retirement homes and other locations than you can shake a stick at. If that weren't enough, he's always eager to greet new visitors to the Parrot Garden with his legendary Seppi dance.

And now Seppi's well-deserved happy ending has come at last. He's going home with his best buddy in the world — Al Johnson, a Best Friends parrot maintenance staffer who is retiring in two weeks. "Seppi is retiring with Al," says Jacque. "He'd be brokenhearted if he didn't."

Path to stardom for bird

As it turns out, Seppi wasn't always the crowd-charming character so many people know and love today. When he came to Best Friends years ago, after his original family passed away, Seppi would chase off anybody who came near. That included Al. "He bit me a lot," Al says with a smile. In fact, it took over a year for Seppi to truly warm up to Al. "I kept trying to win him over," Al says.

Deep down, Al remained convinced they could be good friends. He continued trying bit by bit to win Seppi's trust. "Finally, one day he just started responding to everything I did," Al says. Seppi decided Al was somebody he could not only trust, but also a buddy he could hang out with. They've been inseparable ever since.

Not only did Seppi find a close friend in Al, but because of that friendship, Seppi became open to meeting people from all walks of life — kids in particular. At the first sight of children, Seppi immediately starts hamming it up and showing off to get their attention. And they love him for it. "Seppi is who he is because he had that loving bond with Al," explains Jacque.

Riding off into the sunset: Adopted into a forever home 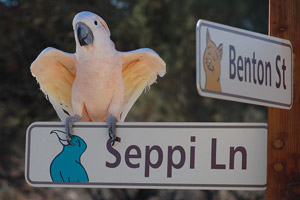 Now that Al is ready to retire, Seppi is going home with him once and for all. Al and his wife, Evy, have stayed busy getting ready. They expanded their home, building an extra room for Seppi with plenty of sunlight, which he enjoys. Next will come a large outdoor aviary. "Then I'm putting in a little water fountain to make him feel at home," says Al. When it comes to taking care of your longtime buddy, clearly a little pampering is in order! "I'm excited to take him home," Al says.

As for the rest of the parrot staff at the Sanctuary, while they'll certainly miss Seppi, they couldn't be more thrilled that he's stepping out of the public limelight and into a quiet home all his own with his favorite person in the world. "They belong together," says Jacque.

Even though Seppi is leaving Best Friends, there are still many, many other incredible birds to meet at the Parrot Garden. Be sure to stop in and say hello on your next visit to the Sanctuary.