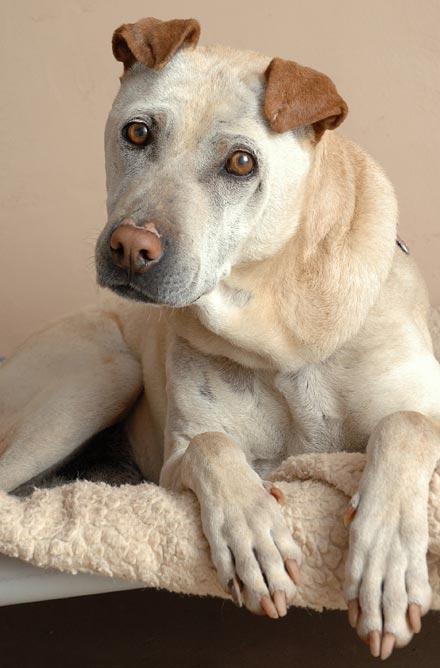 Some dogs at Best Friends can only be handled by staff. Maybe they’re a little grumpy, or maybe a tad jumpy around people, but for one reason or another these dogs can only be handled safely by staff until they work through their gripes – which they almost always eventually do. But sometimes even with love, skillful training, and the staff’s best efforts … some dogs take a very long time.

Meet Spencer. He is a Shar-Pei mix and a legend around Best Friends. When Spencer showed up as a three-year-old, he was full of steam and had nothing but hot lead in his pants … er, fur. Spencer was king of the hill, the big boss in town, and he had no problem whatsoever letting other dogs know it. For nine years, he moved around the sanctuary from area to area, grumping and grousing along the way. "Hey, you! Yeah, you! You better fill out a change of address form, cuz’ this is my play area now!"

And then a year ago, Spencer decided to change his grouchy ways. Maybe a light clicked on, or a UFO beamed him up and fed him some chill-out beans, but one way or another, Spencer decided he didn’t have to be king of the hill anymore. Other dogs were suddenly just fine, people were great, and snuggling beat the heck out of complaining. He was no longer a "staff only" dog. It was like magic!

He’s now had his 10-year anniversary at Best Friends. The past 12 months or so, he has enjoyed a bunch of doggie sleepovers with visitors. He lives for walks, is in great health (no meds or special needs), and you’d never imagine in a million years that this marshmallow of a hug monster ever used to push anyone around. These days, Spencer is looking for a couch to call home. And with as many adoring fans as he’s picking up along the way, it shouldn’t be long!