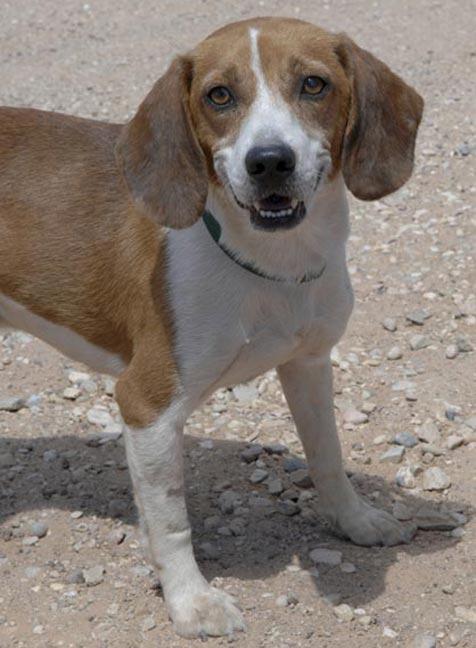 Shy beagle who has seizures finds home with beagle lover

After a marathon day of "DogTown" episodes, viewers sent in a record number of applications to Best Friends’ adoptions office.

The re-airing of the popular television series based on Best Friends’ work with dogs played nonstop on the National Geographic Channel on December 24, causing the influx of nearly 50 adoption requests.

Those requests are being processed and some are already resulting in adoptions. Sometimes, though, a bit of education is necessary. A few applicants asked for what adoption coordinator Tammy Rolfe calls "perfect dogs."

"Some wanted dogs who are good with other dogs, good with cats and kids, and are house-trained – perfect," she says. "I try to be as blunt as possible and give them the dogs’ histories. Many of our dogs have special medical or behavioral needs. We send them home if it’s the right setting for the dogs’ individual needs."

Shy beagle who has seizures

One of those going home is Shiloh, a beagle who was filmed for one of the "DogTown" episodes, but whose story ended up on the cutting-room floor.

"He’s a little beagle who’s on the shy side and has seizures," Rolfe says about five-year-old Shiloh, who arrived at the sanctuary from a rescue group in Tampa Bay, Florida. "He’s going home as soon as we arrange transportation."

Zena LeCoff, who lives in the Philadelphia area, applied to adopt Shiloh after she watched a "DogTown" episode. She knows the breed, Rolfe says, and has two other beagles with whom Shiloh can play.

As for handling the surge in adoption applications, Rolfe says she went through them one at a time. Each application requires individual attention, one-on-one phone conversations, and back-and-forth e-mail discussions about available dogs at the sanctuary who may be a good fit.

For Shiloh, a home visit was done by a volunteer and references were checked. "It’s a done deal," Rolfe says. "We just have to set up transportation. He can’t fly because of his seizures, so I may drive him there myself."

Read about another dog with neurological issues.