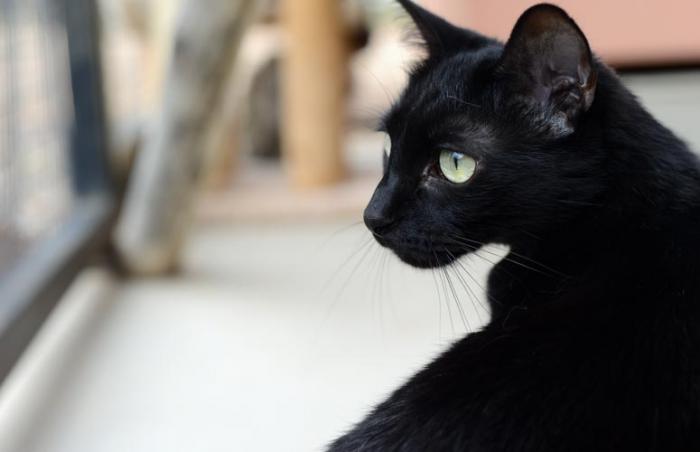 Shy cat no longer a wallflower

For a cat who spent the first four years of her life in a tall cat cage with multiple shelves for eating and perching on, Violet’s come around pretty fast here at Best Friends Animal Sanctuary. Once deemed “too shy” to be adopted from the shelter she found herself in, today she’s proving she doesn’t deserve that label at all, and that cats like her can turn around if given some time and the chance to experience true love and understanding.

Violet came to the Sanctuary from an underfunded, understaffed shelter. She had food, water and a roof over her head, but she spent nearly all of her time in her tower and didn’t receive much socialization. That set the petite black cat up for a lifetime as a wallflower. She was overlooked for adoption time and time again because she was too timid to even venture out of her safe place so people could see her sweet little face.

Finally, the shelter reached out to Best Friends for help with Violet and several other cats who were also having a hard time finding homes. When she arrived at Cat World at the end of June, Violet kept right on hiding. 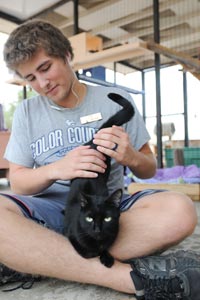 But Cat World caregivers knew Violet would have a much better chance of being adopted if she came out into the light and learned to accept people into her world. They also knew it wouldn’t happen overnight. Violet would have to learn to trust them on her own terms.

So caregivers set a chair by the open door of Violet’s enclosure and spent time sitting beside her and talking to her every day. They used baby food to coax her to come closer to them. Within a few weeks’ time, Violet began letting people pet her. Although she still wasn’t coming out on her own, caregivers remained patient.

Finally, Violet rewarded their patience one day by stepping out of her safe place and climbing into Cat World caregiver Levi Myers’ lap. “She wasn’t too shy,” he explains. “She just didn’t get enough interaction, so she didn't know how to react to people giving her attention.”

That’s all changed now. Violet has left her tower and is out and about all day long. Today she not only craves attention, she actively seeks it out. She loves getting butt scratches and curling up on a warm blanket in someone’s lap. And she’ll follow her caregivers and the volunteers around for treats and pets.

“After living in that tower, it's amazing how she's come to trust people,” remarked Joni Parker, who, for the fifth year in a row, recently spent several days volunteering in Cat World.

But it’s not just people Violet’s come to trust. She’s even begun making friends with other cats. That includes one of her roommates, a grey tabby named Dylan who she’ll snuggle up with sometimes for a power nap.

Now Violet, the little wallflower who couldn’t imagine stepping out of her tower, has blossomed into one of the biggest, brightest personalities of Cat World.

To help more animals like Violet get the royal treatment they deserve, become a Best Friends member.