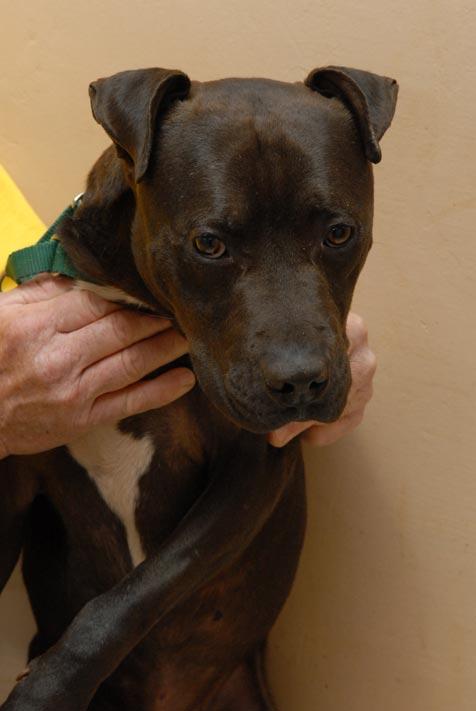 Sometimes life can seem pretty scary. Lance the dog would certainly agree. He used to be so fearful he'd run and crash into the fence whenever somebody approached. That’s a rough way to live.

Lance had good reason not to trust people, though. He's one of the 22 dogs who came to Best Friends from the estate of former NFL quarterback Michael Vick after he was arrested and charged with "conspiracy to engage in dog fighting in violation of the Animal Welfare Act." Lance spent who-knows-how-long living with cruelty and violence as part of his daily life. All at the hands of people who didn’t care about him beyond his abilities as a fighter. No wonder he didn't want to be around people. They’d always let him down before.

When he first came to the sanctuary, Lance was one of the most withdrawn of all the Vicktory dogs (as we’re now calling them). Crashing into the fence was only one way he tried to hide. Lance would also pace around frantically in his play area, trying to run away from the world. When caregivers took him on walks, he hunkered down and tried to hurry through to the end so he could return to his living space.

The staff members working with Lance know he needs time. They are willing to give him the room to move at his own pace. But guess what? He’s already rounded a couple of corners. He's realizing that life can have some good in it, too.

For instance, he'll now play with toys on occasion, which he wouldn't do when he first arrived. And on some of the walks, he’s started really taking an interest in the terrain around him. Sniffing, looking, checking everything out - even picking up sticks in his mouth now and again. That's a big step forward!

Lance still paces in his play area from time to time, and he still doesn’t know how to trust completely, new people in particular. He has a long journey ahead, but it's not one he'll have to travel alone. There is help and loving hands every step of the way. And someday, Lance will come to realize that for himself.

To keep up with the progress of all the Vick dogs at the sanctuary, please view the Vicktory dogs page of the website.