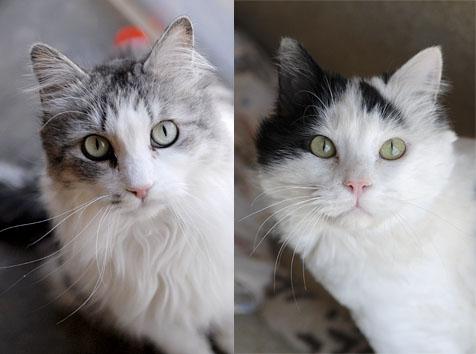 For those with a mind for science, here’s an experiment to try. First, locate your nearest third grade classroom. With permission from the teacher, bring six or seven crates of candy to class one morning and turn the kids loose for an hour or so. Let the sugar kick in fully, then give the kids a couple of dodge balls and try to track how many calories are burned in a single minute. (Hint: bring a powerful calculator!)

If you can conjure a mental image of the kind of energy such an experiment would unleash, you have a fair idea what it would be like to let sanctuary cats Raed or George have access to coffee. Thank goodness nobody is actually going to let them drink the stuff — but one of them will soon become the perfect poster child for Silver Bean Coffee.

Several other sanctuary animals have graced the label for Silver Bean Coffee in the past, including one of the Purrty Dozen. Lois the cat, the girl for whom the Purrty Dozen campaign was launched in the first place, posed for a label — and that label helped her find a home. Must be some magic beans in there indeed! The whole point of the promotional labels is to help sanctuary animals find homes, and with Lois it worked wonders.

And now, though only one of them will end up on a coffee label, both remaining cats in the Purrty Dozen campaign are still hoping like crazy to find a home. George and Raed have watched every other cat in the program find their own happy ever after — but they’re not about to give up hope that their turn is still right around the corner.

These final two cats have a bit in common, as it turns out. Both have been described as "dog-like" cats by their caregivers (George even plays fetch with his toys!), both are somewhat high energy, and both have a tendency to become over-stimulated at times. Which means that while they may have the perfect face to model for a coffee label, it’s probably not a good idea to give them an actual sip. At least not unless you’re in a room with padded walls and shatter-resistant windows! (Even with those precautions, coffee would still not be a suitable drink for any kitties.)

Whether by coffee label, billboard, or hot air balloon ad, these two cats are determined to find a home come what may. And once they do, the Purrty Dozen campaign will officially be a clean sweep. So, anybody out there who drinks decaf (or who knows how to lock up the real stuff!) looking for a new friend?

Find a perfect cat to adopt.