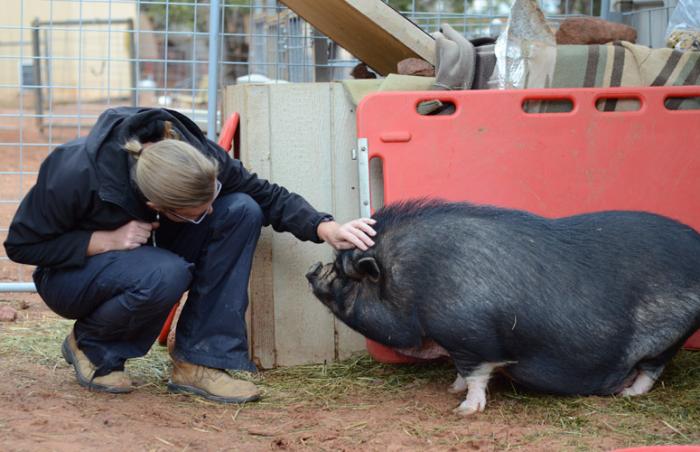 A 300-pound pig might not be an oddity at a state or county fair, but when a potbellied pig gets to that size, people are going to notice. Poor Sammy was super-sized when he arrived at Best Friends. He could barely walk, or move at all, and there was so much fat around his eyes that he was "mechanically" blind. 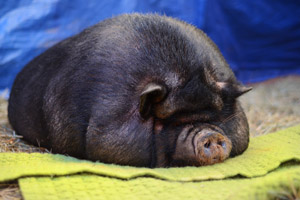 In his old home, Sammy was very loved; but he was also being killed by kindness. His people kept him indoors and showed their affection through food. This proved disastrous for Sammy's health and well-being, but by the time his people realized he needed help, his quality of life was very poor.

Sedentary pig who was used to eating junk food

Sammy's unfortunate condition presented a challenge for caregivers at the Sanctuary. Though he's only about five years old, Sammy was spending most of his days lying down, and his digestion was very slow. He was also used to eating lots of junk food, so the healthy diet of pig pellets, lettuce and vegetables his caregivers offered did not suit his palate at all. At first, he would only try some pig pellets and Cheerios, but now he's agreed to incorporate some vegetables into his diet.

The new diet is helping Sammy lose weight, but no weight loss program is complete without some form of exercise. And for a sedentary pig like Sammy, exercise means simply getting up and walking around. Ronnie Gentry explains that she and the other caregivers in Piggy Paradise try to get Sammy up on his feet at least twice a day. However, he is still pretty reluctant to move, and he certainly isn't afraid to express his displeasure about the mandatory workout.

Moving around was difficult for obese pig

On a recent, bitterly cold day, Ronnie gently tried to haul Sammy up from the bed of hay in his heated enclosure. But Sammy didn't want any of this; he released a series of loud grunts, groans and squeals of protest, letting Ronnie know precisely how he felt. But eventually he relented and lumbered out into the cold and the sunshine, where he relieved himself and enjoyed a drink of fresh water before heading back inside.

Moving around like this is still difficult and somewhat painful for Sammy. Though he is now down to a much slimmer 200 pounds, he has at least 60 more to lose, and his feet have been damaged from all that excess weight. His toenails were also growing abnormally, necessitating a pedicure at the Best Friends clinic. This procedure caused caregivers some concern because Sammy had to be sedated for it, and sedating such an overweight pig is not without risk. Fortunately, relieving some of his pain proved to be worth it. 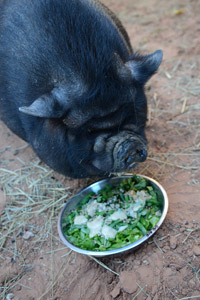 Though Sammy still has a long way to go, he is on the road to recovery, and there have been a number of bright spots along the way. One of them happened a couple of weeks ago when Jen Reid, manager of Horse Haven and Piggy Paradise, arrived at work to find that Sammy had gotten up and squeezed himself through the piggy door on his own - without anyone coaxing him.

The fact that Sammy took this initiative, and that he was able to fit through the door, was a major milestone along his journey. He has even made a new friend - a fellow potbellied pig named Panda who also used to live alone. Now he has some much-needed porcine company! It's a whole new (and much healthier) life for a pig who desperately needed a change.

What should domestic pigs eat?