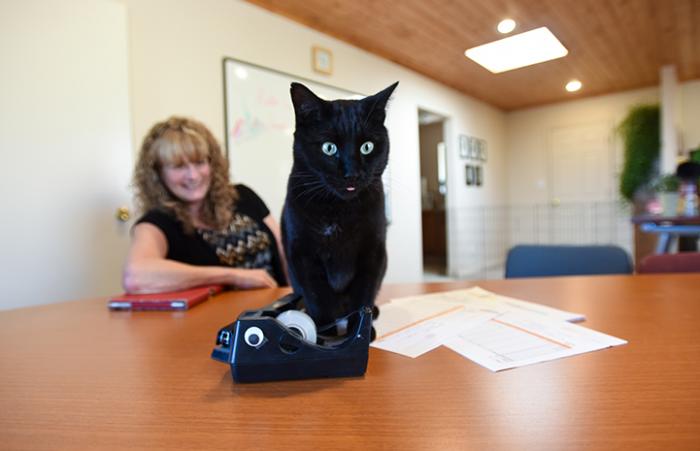 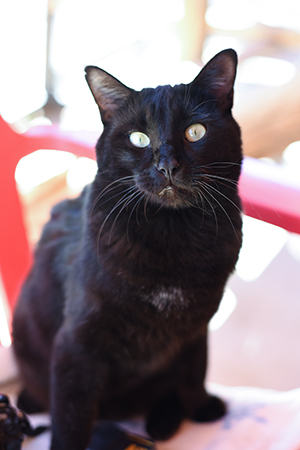 Like every new cat who comes to the Sanctuary, Chad began experiencing a whole new life as soon as he arrived. While it’s likely that a home is in his immediate future, until the time comes he’ll call Best Friends home, and that means finding just the right spot for him at the Sanctuary.

The former shelter cat spent his first two weeks in the Cat World clinic, where new arrivals are checked over by Best Friends vets who deal with any medical conditions they may have. The vets also try to get a feel for animals’ unique personalities — in this case so that they could pick the best place in Cat World for Chad to live.

Confident cats move in with others who match their personalities and energy levels. Low-key cats move to quieter environments where roommates are less rambunctious. Cats with special needs are placed where they can be closely monitored and given extra care. Some cats have strong preferences or special “requests” that also help determine where they will live. Chad made his likes and dislikes pretty clear, and now he’s getting five-star accommodations.

First of all, Chad has the feline leukemia virus (FeLV) — a condition that weakens cats’ immune systems and makes them susceptible to secondary infections. Three-year-old Chad has been healthy so far, but like all cats with FeLV, he requires special monitoring and prompt veterinary care if he becomes sick. Because FeLV is a social disease (meaning that it is spread from one cat to another through close physical contact), FeLV-positive cats must be kept separate from cats without the virus.

The Sanctuary has an entire area dedicated to FeLV cats and their care, so Chad went to live there. But he was less than thrilled with his new digs. Like most Cat World living areas, CalMar has FeLV cats living together in large rooms. But that wasn’t going to work for Chad. As much as he loves people, he’s standoffish and aloof with other cats. Participate in cat social behavior? “No thank you,” says Chad.

There is, however, a large laundry room at CalMar that has become Chad’s room. There, he has caregivers all to himself whenever they do laundry. He also has access to a nice outdoor cattery area that he takes turns using when other cats aren’t there.

Chad seemed to like the fresh air so much that his caregivers even set up a special screened-in play yard for him outside the building. Whenever the weather is nice, Chad spends time in his play yard every day. From there, he not only gets to watch the Sanctuary’s wildlife, but he can also observe other cats lounging in the nearby cattery — without any fear that they will invade his space.

Chad now had the perfect set up. Or did he? The bobtail cat is so people-oriented that whenever his caregivers were in the room, he’d often leap up from the washer or dryer onto their shoulders. He seemed to be saying that he needed more people time. So he got it. 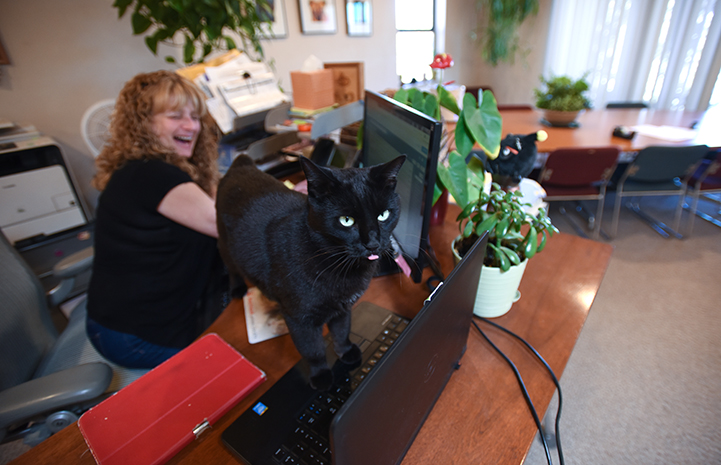 Chad spends every Monday in the office of the Best Friends animal care director. Being an office cat has its perks. Chad gets to review important documents before anyone else sees them. He also hangs out with executive assistant Laura Rethoret while she’s working. Sometimes he sprawls out on her desk. Sometimes he sits on her lap. And other times he drapes himself right over her keyboard.

“He’s perfect and really interactive with the staff,” says Laura. “He likes to check out new things and to play and explore, but he’s never destructive. He’s just the right amount of affectionate.”

Chad also gets to go on occasional sleepovers with Cat World volunteers. It’s another fun way for him to spend time in a homelike setting, while getting some one-on-one time with people. And while a home of his own would be his first choice, Chad’s pretty content with his new life — where his wish is everyone’s command. 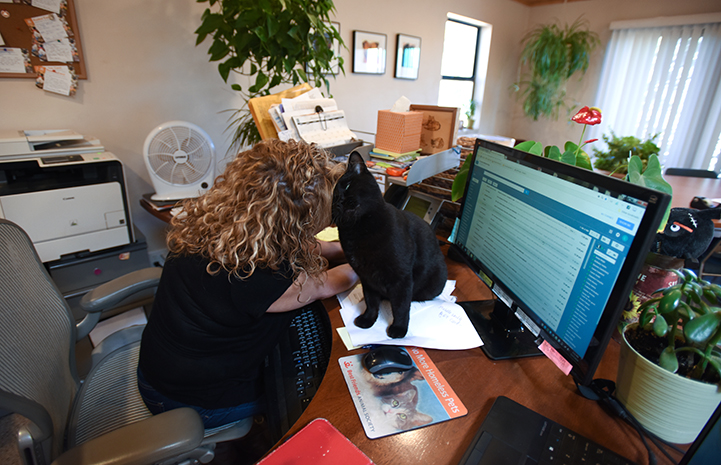