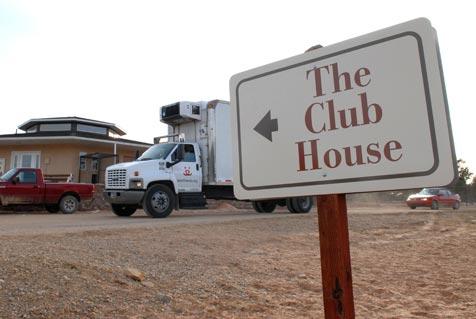 Advocating for the dogs from Michael Vick's Bad Newz Kennels

When the Michael Vick dogs are introduced to the public at Best Friends on Monday (see sidebar story), it will signal the true new beginning for the 22 pit bulls who were in the group that survived the imprisoned football star’s aptly named Bad Newz Kennels.

They’ve been at our sanctuary in southern Utah for nearly three weeks, becoming acclimated to their accommodations and getting to know the Best Friends caregivers (as well as many other sympathetic staffers and visitors).

Under an agreement among federal officials, Best Friends, and rescue groups that accepted the other Bad Newz refugees, we’ve kept them pretty much under wraps until the final Vick-related case was closed January 25.

Learn more about the Vick dogs

Renaming the dogs the Vicktory dogs

From now on, we no longer refer to them generically as the Vick fighting dogs, but as the Vicktory dogs, with their own names and unique personalities. Best Friends rehabilitators are working with them on socialization and other canine life skills, and our adoptions staff will set about the task of placing them in exactly the right homes.

"We will work with these guys and gain a full understanding of who they are and what particular homes they will be looking for, and we’ll try to find those homes and make a love connection," says Patty Hegwood, director of animal care at Best Friends.

That message and motivation has been consistent throughout and beyond the Vick case – from his indictment July 17, to his guilty plea five weeks later, to his sentence of 23 months in prison handed down on December 10, to negotiations over what would happen to the dogs.

Best Friends worked behind the scenes to ensure the dogs’ future, even as other groups pushed for them to be euthanized. A spokeswoman from People for the Ethical Treatment of Animals called them "ticking time bombs," and said that "rehabilitating fighting dogs is not in the cards."

The Humane Society of the United States agreed with PETA. "Officials from our organization have examined some of these dogs and, generally speaking, they are some of the most aggressively trained pit bulls in the country," HSUS president and chief executive officer Wayne Pacelle told the Atlanta Journal-Constitution in early August. "Hundreds of thousands of less-violent pit bulls, who are better candidates to be rehabilitated, are being put down. The fate of these dogs will be up to the government, but we have recommended to them, and believe, they will be eventually put down."

Meanwhile, away from the TV cameras, radio shows and newspaper interviews, Best Friends and others considered the well-being of the dogs and worked on their behalf.

"Several people got involved all at once, using their own contacts," says Russ Mead, Best Friends general counsel. "We were approached by an attorney in New York City, Flora Edwards, to help."

She spoke with him and Best Friends executive director Paul Berry, who gave Mead the go-ahead to work on a legal brief to be filed in the Vick case.

Eleven animal welfare groups were parties to the 31-page brief, which "speaks for the voiceless victims of the defendant’s criminal conduct."

In addition to calling for appropriate prison time and fines for Vick, the brief, filed September 12, offered "a process to conduct assessments to determine which of the survivors can be saved and a plan to place as many dogs as possible in specialized care where they can be rehabilitated and to provide sanctuary and special care for those who have any potential quality of life."

Mead drafted major sections of the document, which was welcomed in the animal law world. "The brief was significant in that we were speaking to the court on behalf of the victims of the crimes, the dogs themselves," he says. "Unlike most of the rhetoric surrounding the case, our brief actually became part of the case. It is, of course, hard to say how much the brief influenced the court, but many of the points in the brief were followed by the judge."

About a month later, the judge appointed Valparaiso Law School professor Rebecca Huss to represent the interests of the dogs in the legal proceedings. She made two trips to perform individual assessments on the dogs, using a previous assessment by the ASPCA as background.

The purpose of her second trip in late November was "to determine the final placement of the dogs based on all the evaluations of the dogs’ behavior and in light of the options available for their care," according to her eight-page report filed December 3 with the court.

Huss recommended to the court that Best Friends be entrusted with 22 of the 47 surviving dogs. The rest were placed across seven other organizations.

"Best Friends Animal Society is accustomed to dealing with dogs that have special medical and behavioral needs," she told U.S. District Judge Henry Hudson, who approved her proposal. "Best Friends Animal Society is committed to providing what each of the dogs needs to be able to thrive in a sanctuary environment if it’s necessary for a dog to remain in such an environment for life."

Paul Berry said Best Friends is grateful that the court gave us the opportunity to do what we do best – provide a caring, rehabilitative home for abused, homeless animals. "They deserve the very best that we can give them, and we are prepared to provide a safe place for them to stay for the rest of their lives," he said.

Preparing the sanctuary for the Vick dogs

At the sanctuary, maintenance crews retrofitted one of the octagons in Dogtown to provide living quarters for the Vick dogs. Octagons provide indoor shelter and feeding areas, and have dog runs fanning out from the building. Inside, caregivers can see all the dogs at a glance and keep an eye on their activities. Each dog will have his/her own 10-foot by 20-foot outdoor run and a space to come into at night.

Costs associated with care for the dogs

In a separate action, Judge Hudson ordered Vick to pay $928,073 in restitution for the "past, present and long-term care of all the dogs." Huss, while acknowledging that the costs of care would be higher, recommended that rescues be allocated $20,000 for each "sanctuary dog" (the dogs who are likely to spend a significant amount of time, if not the rest of their lives, in a sanctuary or foster home). The judge reduced the amount to $18,275 per dog. He allocated $5,000 for dogs deemed likely to be adopted.

Best Friends estimates the average cost of lifetime care for a dog to be $40,000, but the cost of caring for the Vick dogs will probably be more. Because the Vick dogs need to live individually (most of the dogs at Best Friends live in group settings), they will require additional facilities. They’ll also need a higher ratio of caregiver time per dog, according to Hegwood.

Because of concern that dog fighters may try to get them, the Vick dogs will have more security, and the adoptions staff will require more in-depth background checks from potential adopters. As repugnant as it is, the fact remains that Bad Newz Kennels produced some dogs who would be prized by other dog fighters.

The resulting stipend to Best Friends was $388,775. The other rescue groups, who took in four sanctuary dogs and 21 adoptable dogs, received $178,100.

The court paid the remaining $361,198 to the U.S. Department of Agriculture, which was responsible for the dogs during the legal proceedings. That amount includes the cost of transportation, care and feeding; $31,051 for the ASPCA’s behavioral assessment; and $100,000 in hourly payments and travel expenses for Huss.

Contrary to rumors and Internet speculation, Best Friends and the other rescues agreed not to "solicit money or conduct fundraising activities with the sole purpose of raising money for the care of one or more dogs received in the case."

That agreement with federal officials, however, allows all the groups to talk about the life stories of the dogs as part of general fundraising activities. It also contains conditions for care of the dogs, including spay/neuter provisions and adoption restrictions.