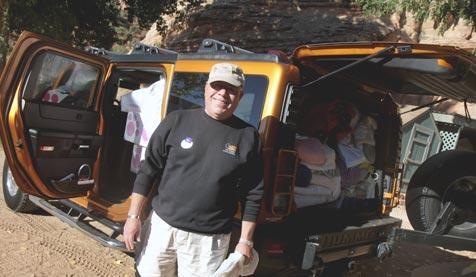 Special delivery for animals in need

Ever heard of the snowball effect? The concept is that you take a little snowball and roll it down a hill. If conditions are right, gravity and physics turn that cute little puff-ball into a monster that can bury your sister’s bike in one fell swoop.

Tom Fuller of Chicago, Illinois, has a shining example of the same concept. It all started with telling his neighbors he was visiting Best Friends! Five years ago, Tom mentioned to a couple friends and neighbors that he was visiting the sanctuary. "Hey," they said, "Would you mind bringing along this stuff to donate?" Tom doesn’t remember exactly how big that first round of donated goods was, but it started the snowball tumbling down the hill.

Soon, word got out. People started finding more and more stuff to donate. And then Tom got to thinking: If everybody had all these things just lying around, what would happen if he actually went out and looked?

Spreading the word about pets in need

Tom began hitting up vet offices and animal hospitals, leaving literature and fliers about Best Friends. Often, he’d pass around the Best Friends wish list to see if they had anything to donate.

Before long, items began flooding in. A retired Marine, Tom drives a Hummer, which is helpful on these trips. He can barely fit in everything the community now donates. On this last trip, in fact, Tom is dang lucky nobody wanted to pitch in a toothbrush at the last minute. It probably wouldn’t have fit! In fact, when he opened the back door at the unloading area, things started flying out like a Jack-in-the-box unleashed.

Types of donations to help dogs, cats and other animals

Included in this last collection of gifts was a portable x-ray machine (donated by Chicago Veterinary Emergency Vets), pet food, tons of toys, all kinds of medical supplies, blankets, towels, a box of tennis balls, and on and on. One of his neighbors went out and spent $50 on cat food. "You didn’t have to do that," Tom told her. "I know, but I had coupons!" she replied.

Another neighbor in his retirement community has a daughter who is a working vet. The daughter donated a whole bunch of puppy vaccination kits—and those aren’t cheap! All told, Tom brings in thousands of dollars worth of medical supplies and other goodies each year.

He wants to get the word out that this really is simple. "Driving to Best Friends?" Tom asks. "Then tell your neighbors. Tell your vets!" You’ll be amazed how much they want to help the animals. Only don’t be surprised if you end up needing to use your sideview mirrors to make the trip. Thanks, Tom, for rallying your whole community like this. The animals really appreciate it.

Learn how you can visit Best Friends. Or, find out what the animals are wishing for on their wish list.