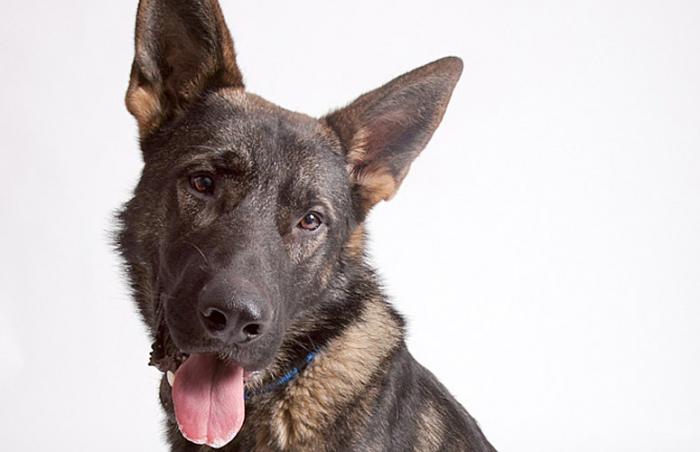 When Lauralea Oliver, animal assessment/transport specialist at Best Friends-Los Angeles, first saw Crash the German shepherd, she knew he was something special. She was at the Los Angeles Animal Services' North Central shelter, and he caught her eye while out walking with a shelter employee. For her, it was a case of being in the right place at the right time. For the young sable-colored dog, it was a moment of lifesaving fate. 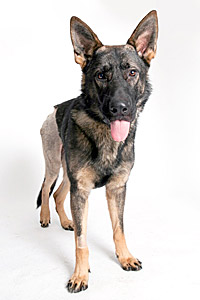 The dog arrived a nameless, unneutered stray after he was hit by a car, breaking his femur clean through. Unfortunately, his predicament is all too common. German shepherds are the third-most common breed in Los Angeles shelters (behind pit bull terriers and Chihuahuas). Unneutered males of any breed often stray in search of unspayed female dogs (also a prevalent problem). But, Lauralea says, "He was just lovely - he's beautiful, and very social." She grew up with German shepherds and knew she was looking at a well-bred, working line dog. But he was still on stray hold, had a serious broken leg, and Lauralea was on her way out of town for a week.

Lauralea says, "Even though there wasn't much I could do at the time, I got his information and posted it on my Facebook page." She assumed by the time she returned he'd be claimed by his owner or a rescue group. But two weeks later, he was still there. That's when his story turned into nothing short of miraculous.

Shelter staff kept him comfortable with pain medication and antibiotics, but no owner or rescue group came forward to take him. They couldn't do the necessary surgery because of the severity of the break and months of recovery he'd need. A busy shelter isn't a good place for a young, rambunctious dog to recover from major orthopedic surgery. In the meantime, he was charming everyone he met.

A foster home and surgery for a dog in need

Lauralea says, "The shelter's veterinarian told me, 'I love this dog. I was going to put him down three days ago, but I just couldn't do it. Please take him.' " Then the stars aligned in record time. Lauralea called back to the Best Friends Pet Adoption and Spay/Neuter Center and said, "I just can't leave this dog here."

Per the partnership with Los Angeles Animal Services, all animals at the Best Friends Pet Adoption and Spay/Neuter Center come exclusively from one of the six city shelters - including the North Central shelter. It was settled. Best Friends would take responsibility for the dog (now named Crash), including his long recovery period and finding him a home when the time came.

But he needed a foster home and surgery by a board-certified orthopedic surgeon - ideally one with rescue-friendly prices. That same day, long-time German shepherd rescuer Michelle Loera, who has experience with working dogs, saw Lauralea's Facebook post. She happens to have a 14-year-old sable German shepherd. She says, "When I saw Lauralea's plea on Facebook, I just couldn't sit by and not do anything for this dog." 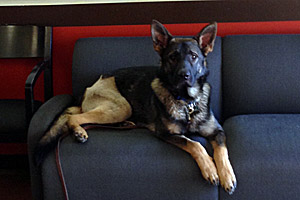 Michelle found a board-certified veterinarian to perform surgery the very next day, and she called her contact at an animal-friendly foundation. By the time Crash's three-hour surgery was done, Michelle and Lauralea had raised enough in individual donations and a generous gift from the foundation to cover the cost of surgery. Lauralea says, "It was incredible; I was in tears." After all they'd been through, Lauralea became Crash's foster home.

Thanks to the collective effort, Crash was delivered from a bleak situation to safety. He is nearly 100 percent recovered from surgery, and multiple people have applied to adopt him. All because a few key people couldn't get the sable shepherd out of their minds, and they did something about it.

See other adoptable dogs at the Best Friends Pet Adoption and Spay/Neuter Center.

The Ronald and Catherine Gershman Foundation