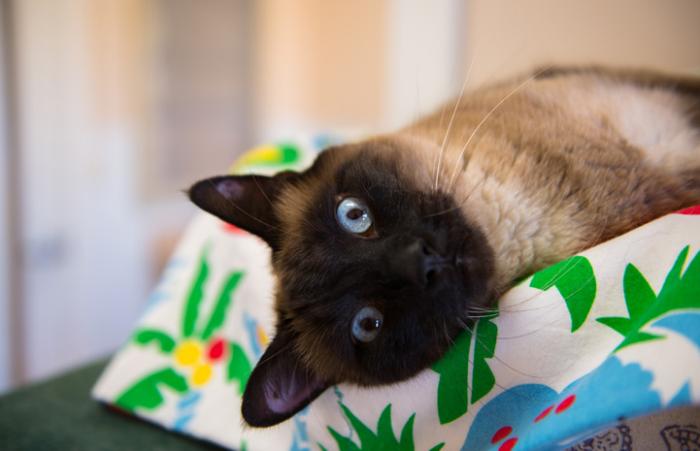 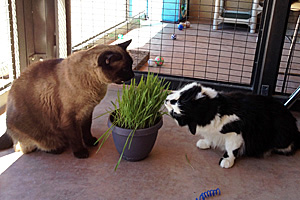 When Spencer, a handsome Siamese mix, and Matisse, a petite black-and-white cat lean in to nibble cat grass from the same plant, it looks like a normal feline friendship. However, until recently, it wasn’t possible for Spencer to be in the same room as another cat, let alone share a treat.

That’s because Spencer was an angry, stressed cat when he arrived at the Sanctuary. No one knew quite why he was so upset, but it was clear that the six-year-old needed some changes in his life if he was ever going to be happy.

Cat learns not to bite

The first hurdle for Spencer was learning that biting isn’t the best way to make friends with people. So Cat World caregivers provided him with better outlets for his energy. He went on daily walks with Cat World staff, and caregiver Dale Oster sat in his room and read to him. If Spencer used his teeth on her, she would get up and leave, signaling that people don’t like that.

As Spencer learned he could get all the attention and affection he wanted as long as he didn’t bite, his relationships with people improved greatly, and he started to settle in and relax. But he still had issues with other cats. He would run and hide, or start hissing and shrieking whenever he saw them.

There was another challenge to Spencer being around other cats. He’s “discordant,” which means he’s tested positive (in one of two common tests) for feline leukemia (FeLV).  That means if he lives with cats not infected with the virus (and he does in fact have FeLV), he could spread it to them. It also means that if he lives with cats who are known to have FeLV (and he doesn’t have it), he could catch it from them. For most cats in that situation, there are few options for living with others; but at Best Friends, there’s a plan for cats just like Spencer.

Spencer tried several different living situations, but he was happiest in the “discordant suite” at Cat World Headquarters, where he had one of two adjoining rooms to himself. There, he didn’t mind seeing some felines on the other side of his outdoor cattery.

As Spencer became more and more comfortable around his suite mates, he and Matisse began gazing at each other while lying on chairs on either side of their adjoining cattery. Cat World caregivers noticed the two cats’ interest in each other, and decided to give them a chance to become friends.

Since Spencer wasn’t showing any signs of aggression toward Matisse, and both cats are discordant, they opened the door separating their outdoor cattery. Matisse would start their meetings by rolling around on the floor, trying to get Spencer’s attention. At first, the socially awkward Spencer seemed unsure of what to do with his flirty new friend. 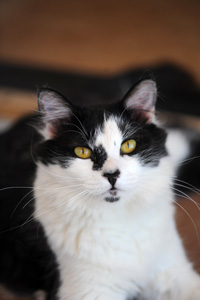 But Matisse has won him over during these short, supervised play dates, and he has responded so well that caregivers are hoping that he and Matisse can one day become roommates. Of course, Spencer’s comfort level will determine if and when that happens, but so far, he’s made amazing progress. "I can't believe how changed he is," Dale explains.

Now that Spencer can live peacefully with people and might even be happy to be around other cats, he enjoys a lot more company. Dale has introduced him to a number of volunteers, whom he’s met “beautifully.” And his friendship with Matisse is in bloom, showing that, given plenty of time, patience and understanding, even the toughest cats can turn the corner and show a whole new side of their personalities.

To bring hope and healing to more animals like Spencer, support our work.