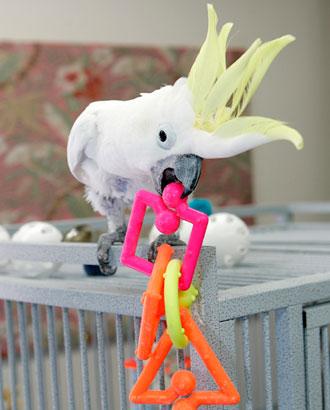 Sulfur-crested cockatoo moves from the city to the country

Uh-oh. Does anyone get the feeling that Sunshine, the new cockatoo at Best Friends, thinks the folks and animals here are all a bunch of country bumpkins? "Yeah, and he’s in the know!" laughed a bird staffer.

Cockatoo from the city

The country and the canyons sure must seem strange to a city slicker like Sunshine. Before this, he was living in a Boston housing project. He was well-loved by his family, but the truth was, the apartment was barely large enough for the family to live in comfortably. Sunshine’s little corner of it was just as cramped as could be. Parrots are so active and curious that when a friend came over and noticed how confined he was, she felt terrible for the guy and offered to try to find him a better place. The family really loved him, and so they agreed.

Parrot's journey to the Sanctuary

Best Friends accepted the medium sulfur-crested cockatoo, but getting him here took a lot of teamwork. First, Foster Parrots in Boston held him and got all of his health certificates together for traveling. Then, a generous Best Friends member (though that’s redundant!) donated frequent flyer miles. Then Best Friends sent someone to Boston to bring him to his new country "home between homes" at the sanctuary. And at last, he’s landed!

He’s settling in well. However … he doesn’t seem too impressed by how tough the Feathered Friends neighborhood is. He has no fear of any other bird. He found out that Seppi, a much larger parrot, is scared of sticks. So now he rejoices in picking up sticks with his beak and running at Seppi! This makes our usually brave Seppi hightail it into his cage to hide. Sunshine loves to scream and is just a bit unruly. But he’s very smart, very good-looking, and on the lookout for a home. And who knows? Maybe the peace of the clear skies will seep into him, and he’ll decide being a country bumpkin might not be such a bad idea after all. Those canyons do have a way of working magic.