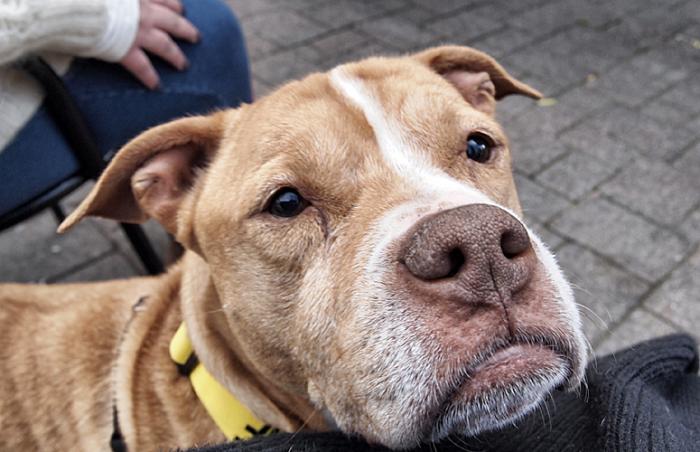 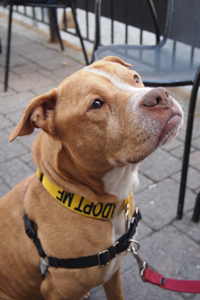 Best Friends–New York took in Tank from Animal Care & Control of New York City during the massive pet rescue in the aftermath of Superstorm Sandy. While his tan-and-white mottled coat and big brown eyes make him look quite dashing, his selective attitude toward other animals meant that he wouldn’t be able to go to just any home. He would need an experienced dog person who ideally wouldn’t have any other pets in the house. So Best Friends staff and volunteers committed to working with Tank until the right adopter came along — whether it took two months or two years.

Volunteering to work with Tank every weekend, Andrea first took him on long walks. Then, the long walks became car rides, and car rides became trips to the park, which became overnight outings. Andrea would have adopted Tank. She tried to get the people-pleasing dog to accept her three dogs, but he prefers to be a solo act.

She would take Tank home, making sure that her dogs were securely in the yard, so Tank could snuggle on the couch with her. “Tank always had to be touching me — either sitting in my lap or having a paw on me,” says Andrea. “There was not an ounce of resistance in him. I could take his food away, put sweaters on him, and he’d just give me kisses.” 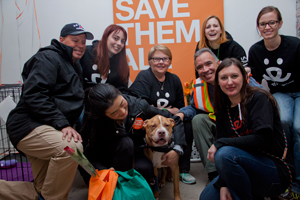 As Tank was getting more socialized, Best Friends staff started bringing him to New York pet super adoption events. Tank got a lot of attention, but no one took the plunge to bring the sweet dog home. While dogs and cats of every size, age and temperament went home, Tank waited.

Yumi Masuda was waiting, too. She lost the center of her world last June when her 12-year-old pit bull terrier passed away. But everything clicked when she heard about the Best Friends Valentine’s Day adoption event in New York City. She was browsing through profiles of adoptable dogs online when she saw Tank. “I thought about him for an entire week,” says Yumi. “When I entered the doors of the adoption event, the first dog I saw was Tank.” She adopted him that day, and the wait was over.

Tammy Heeber, Best Friends–New York volunteer and outreach coordinator, is thrilled with this happily-ever-after for Tank. “We really wanted to get him into the right home,” says Tammy. “We have been promoting this special fellow every way possible, but he was waiting patiently for the right fit all along. It’s fitting for him to find true love on Valentine’s Day.”

And Tank is living his dream life. Yumi loves watching him parade around the house, wiggling his whole body as he proudly displays his stuffed animals. He’ll take a second lap for visitors. He loves chewing his bones, and when it’s bedtime, he brings his toys and bones up to the bedroom. “The cutest thing he does is with a larger rubber ball. He stomps on it with both front paws to make it bounce around some more and then goes to chase it,” says Yumi, an avid runner. Tank has become her trusted companion on long jogs in the beautiful park near their Westchester home.

“Having Tank now in our lives has helped our hearts to start smiling again,” says Yumi.

To help more animals like Tank go from homeless to home, become a Best Friends member.