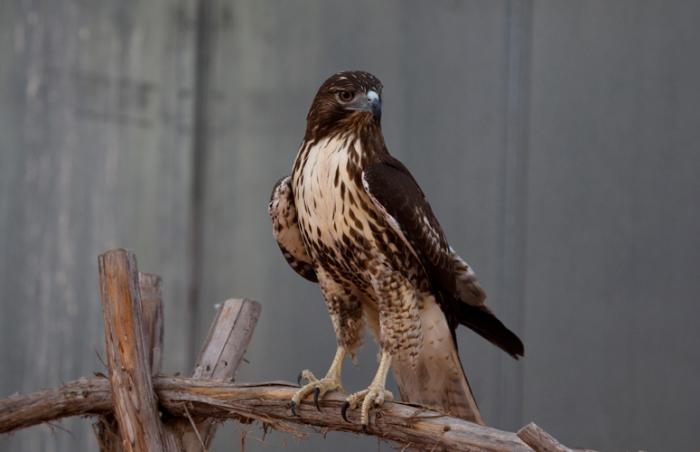 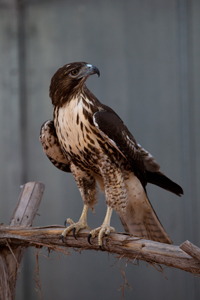 Tilting his head to watch the ravens play on the nearby ladder and to listen to the songbirds in the surrounding trees, the Swainson’s hawk perches on the highest roost in the Wild Friends flight aviary. A high-strung bird, he is not comfortable on the lower perches. Birds generally enjoy the top branches because being up as high as possible near the sky means safety.

The hawk, along with a red-tailed hawk, was transferred to Best Friends last fall from Second Chance Wildlife Rehabilitation in northern Utah. They were sent to Best Friends after they’d already been cared for and their wounds had healed. All that remained was to build up their strength with flying practice in the Sanctuary’s large flight aviary.

In two separate instances, rescuers had found the birds on the ground, suffering from gunshot wounds to their wings. They contacted Debbie Pappas, a licensed wildlife rehabilitator at Second Chance, who cared for them expertly and got them stabilized and much stronger so that they were ready for flight reconditioning.

This Swainson’s hawk had missed his fall migration and needed to regain some weight and get his strength back. Spending the winter in the large flight aviary gave him a good chance to be fully ready by the time spring rolled around.

The red-tailed hawk who arrived with him was released earlier. Red tails thrive year-round near the Sanctuary. However, the migration of Swainson’s hawks is a lot more complicated. 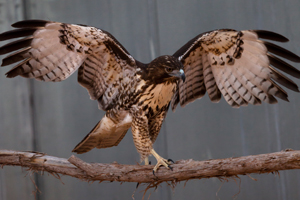 Swainson’s hawks have the longest migration of any hawk. Starting from their summer homes in the western states or southern Canada, their fall migration includes flying all the way through Central America and South America down to Argentina, where they spend what we know as the cold months of winter in the warm, balmy summer of South America. In the spring, they fly back north again.

Swainson’s hawks pass through southern Utah on their way back north in April and May, which was the right time to release this Swainson’s hawk. By now, he’s likely arrived back at his summer home in northern Utah, healthy and free once again.

Learn more about how Best Friends cares for native wildlife at the Sanctuary.