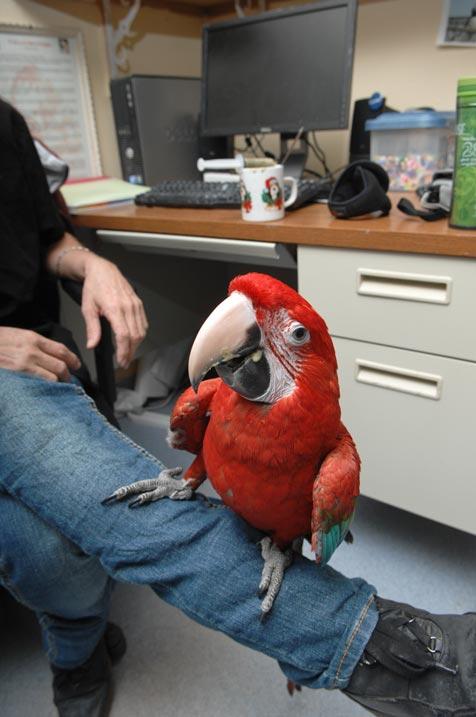 A skilled carpenter knows the value of keeping a toolbox stocked with as many different tools as possible. You never know which one you’re going to need. With animal care, a similar approach holds true. Each animal is an individual. Often, you don’t know what will help until after you’ve tried it.The parrot staffers at Best Friends Animal Sanctuary, however, just stumbled across an unexpectedly helpful tool: the old-fashioned power of jealousy! Hey, with a little creativity almost anything can be put to positive use.

Parrot caregiver Wendy Hatchel has been using a syringe to feed Zoey, a baby macaw who came to Best Friends several months ago from another rescue. She was quite sick when she arrived, yet with supportive care around the clock, Zoey made a full recovery. All along, Zoey has been receiving food and medication through a syringe.

By way of background, most baby birds are pulled from their mothers at a far too young age. Sad to say, syringe feeding is how most parrots eat until they grow old enough to feed themselves. It’s rather odd, then, that most birds end up hating syringes. They either forget what a syringe is for or can’t bear the thought of tasting baby food again! Whatever the reasoning, most parrots actively dislike or even fear syringes. This is normally not much of a problem, except when a bird needs medicine or other vitamins and supplements on a regular basis.

Feeding other parrots with a syringe

A funny thing started to happen, though, as the other birds kept watching Zoey receive her supposed special treatment. That green-eyed monster jealousy raised its head and sniffed the air. "Hey! What’s so special about her? I want in on this!"

It started with Buddy, an extremely personable cockatoo who loves people more than anything else in this world. Buddy began making a fuss and clamoring for attention whenever Zoey received her meals. The only thing that could settle him down was for Buddy to get his own syringe time. This is nothing more than mashed up food, here. No special treats. To Buddy, though, it became more than a handy way to knock back an afternoon snack. It turned into his own private membership at the syringe-feeding club, and he wasn’t giving his membership card back! 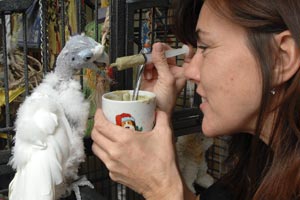 King O the cockatoo was next. King O is another character who thrives on human interaction. It was hard enough for King O to see the new girl (Zoey) getting special treatment with the syringe, yet once Buddy honed in on the action it was more than King O could take. King O, who had recently been afraid of syringes, decided life would not be complete unless he too joined the coveted inner circle. He couldn’t have been happier when he was included.

The group continued to spread as more parrots wanted in. "We’re getting quite the list of them now," explains Wendy. To clarify, they’re only eating a very small amount this way. They still eat most of their real food normally.

The thing is, there is an excellent reason for involving these other birds in the syringe rounds. These birds are learning that syringes don’t have to be intimidating. In fact, the parrots are starting to see syringes as quite positive. Thus, if any of them do get sick down the road, it’ll be a cinch to give them their meds. No fuss, no hassle --just another trip to the private health club.

Sneakiness: now there’s another tool that belongs right at the top of the box!

Please check out our wonderful parrots.

Once you've adopted, read our helpful advice on caring for your birds.