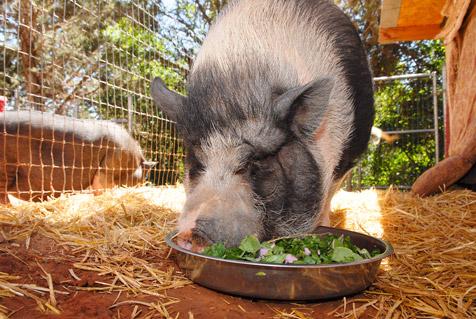 If somebody sells you an apple tree sapling but tells you it’s really an orange tree, no matter how much you might dream of citrus, you’re not getting oranges without hitting the grocery store. The same thing holds true when it comes to breeders selling so-called teacup potbellied pigs. They can make all the claims they want that the pigs will only grow to a certain size; it doesn’t make them true. Teacup potbellied pigs are a myth.

Panda, the newest potbellied pig at the Sanctuary, is an example of that myth gone wrong. This handsome fellow, whom his former family expected to stay petite because of his "teacup" status, currently weighs 200 pounds and isn’t yet full grown. In other words, he’s kind of hard to pull up on your lap for some snuggle time!

Panda came to the Sanctuary several weeks ago when his family moved and couldn’t take him along. He’s two and a half years old now, and still trying to figure out how things work away from home. 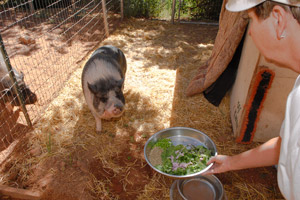 A volunteer helps with feeding time.

He didn’t know what to make of the food at the Sanctuary, for one thing. In his previous home, Panda ate a diet of pellets and popcorn. At Best Friends, he was baffled by salads and other healthy snacks. So, the caregivers had to be tricky, as they often do.

Typically, pigs who come to the Sanctuary don’t recognize greens as something they want to eat. There’s a lot of bad advice out there, from breeders and pet stores, among others, about what to feed pigs. More often than not, pigs who come to Best Friends have been eating pellets, dog food, even mac ‘n cheese and other table scraps. Rarely does a pig come to the Sanctuary with a hankerin’ for a good chunk of lettuce! "A diet of only pellets for pigs is like humans eating nothing but pretzels," explains pig manager Yvonne McIntosh.

The good news is the pigs all tend to learn soon enough that not only does a more natural diet help them feel better, it’s downright tasty.

With Panda, the breakthrough in his food routine came completely by accident. Caregivers had been using the usual tricks with no luck. They coated his veggies with canned pumpkin, yet he wasn’t impressed. They also tried mixing the vegetables together in a puree with pellets, yogurt and frozen corn. The idea here was that since he was used to popped corn and pellets, maybe a parfait of sorts with similar ingredients would appeal to him. Nope. Panda turned up his nose. "We were trying everything," explains pig staffer Patti Platia.

In the end, it turns out Panda shares a dining habit with many human children his age: He simply didn’t want his separate foods touching each other. "Mom! My peas are touching the potatoes!" The caregivers separated Panda’s individual ingredients one day just to make sure he’d at least eat the pellets and get some food down. The result? He cleaned his entire plate. And he has done so ever since. 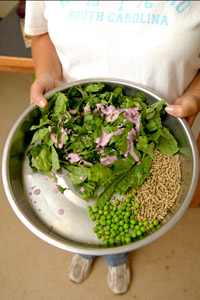 "We should have just checked with his chef," jokes Patti.

Panda had one other hurdle to overcome right out of the gate. He didn’t want people entering his play area. It’s understandable, really. This is Panda’s first place away from home. Suddenly, he’s surrounded by new people, new pigs (most potbellied who come to the Sanctuary have lived as an only pig), different food ... the list goes on and on. It all added up to a bit much for him to take in at once. Panda used to chase caregivers right out of his yard.

After a few weeks, however, Panda has begun connecting the dots. He must be noticing that every time a caregiver comes in, they’re doing nothing but trying to help him in some way. He’s started giving them a pass (a big improvement!) and more or less ignoring them.

No worries. In time, he’ll learn all about the joys of a good belly rub. For now, Panda has actually come a long way. He’s eating his food, and has already gone on a few short walks around the grounds. He loves the big adventure area he gets to explore each day, which is a hilly slope behind his main play area. This place has trees, shrubs and all sorts of adventurous terrain. "He loves to go down there and explore," says Yvonne.

Panda’s whole world might have turned upside down not long ago, yet bit by bit he’s picking up the pieces and starting over, with a little help, of course!

If experience with other pigs proves anything, in no time at all he’ll be grinning the days away. Panda will get his chance at another home, wait and see. Until then, he has the next best thing. Welcome!

By sponsoring a resident of Piggy Paradise, you are helping root out "pignorance" and save a life.

Check out You and Your Pig and find out about maintaining a proper diet, enrichment tips and more to help keep your pig safe and healthy.