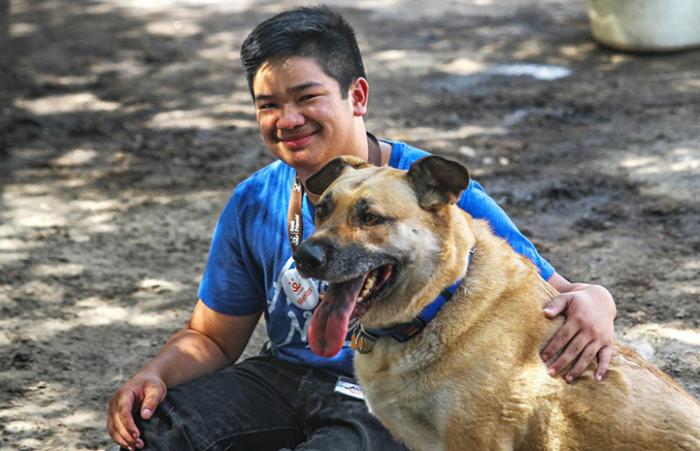 Teen volunteer gets homeless dogs ready for their forever homes

Austin Delos Santos has some advice for his fellow teens. If you’re looking to hang out with friends who are up for fun at a moment’s notice, are full of energy and are always happy to see you, you’re not going to find them by staying at home playing video games. You’ll find them at the Best Friends Pet Adoption and Spay/Neuter Center in Los Angeles.

Austin has firsthand knowledge of this because he’s a volunteer mentor at the center, where he has forged countless friendships with homeless dogs since he started as a Best Friends volunteer at the center two years ago.

From new volunteer to cool kid

When Austin first started volunteering at the center, he worked primarily with the most mild-mannered dogs at the center, who often are adopted quickly. Soon after, he started working closely with the dog caregivers, in particular David Lopez, who taught him how to handle dogs who may be fearful, nervous or extra energetic.

“I have learned that all dogs have their own unique personality,” says Austin, who was recently featured on KABC’s Cool Kid segment for his work helping dogs build confidence. “This is the approach I take to helping all of them.”

Today, Austin is able to work with dogs at the center who benefit the most from extra time, attention and patience. These are the dogs who inspire him the most.

"It’s really rewarding when the dogs you’ve helped get adopted,” says Austin. “A little sad, too, but you know they are getting the home they deserve, and that’s the most important thing.”

Bringing teens and animals together

Austin’s work with homeless pets doesn’t stop at volunteering at the center. He’s also one of the leaders of the animal care club at his high school and has helped organize supply drives including one that lasts an entire week at the end of the school year to collect blankets, food, toys and other items for the center.

The club also encourages students to volunteer with Best Friends and helps those who are interested go online to sign up. Austin and his team also work to teach students about the dangers of puppy mills, the importance of trap-neuter-return and spay/neuter programs, and why adopting from a shelter means saving a pet’s life.

In return for the students’ hard work raising awareness for homeless pets, Best Friends staff have given club members behind-the-scenes tours of the center.

A volunteer who inspires staff

One of Austin’s main roles at the center is that of a mentor volunteer. Encouraging new volunteers to come to the center is important to him, because the more time volunteers spend with the dogs, the more positive and lasting will be their impact on the animals.

“I want them to feel excited to come back,” says Austin. It’s the way that his mentor, Best Friends dog caregiver David Lopez, made him feel when he first started, and Austin wants to keep paying it forward.

Austin performs mentor sessions with new volunteers after they’ve gone through a general orientation, as well as individual mentoring sessions whenever people need one.

To staff at the center, Austin’s dedication to the dogs and his commitment to his role as a volunteer mentor is invaluable. “I know I can count on Austin,” says Christine Quesada, volunteer lead at the center. “It is such a relief when I know he is here volunteering. It means that if I need help, I will get it — no question.”

Christine has worked with Austin from the time he started. In fact, they both began at the center around the same time. And Christine admits that she’s going to be a little sad when Austin graduates and moves on to further his education. “I know he has big plans,” she says. “And we will be happy for him.”

Those big plans include medical school and a career as a physician. In fact, he’s already had his first lessons on how to be a good doctor from some great teachers — the dogs he helps.

“Since they are all so different, they have taught me the importance of really watching and listening to them, so I can help them in a way that is best for them,” says Austin. “I guess you can say they’re helping me with my bedside manner.”