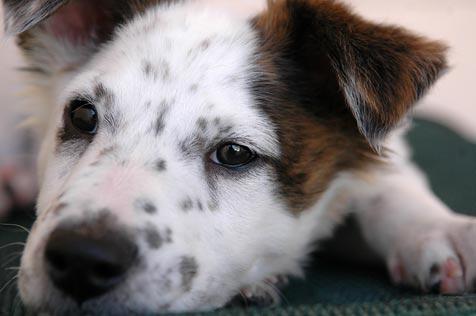 Tikki the puppy was not exactly a bundle of happiness when Best Friends found him. He was lying in a cardboard box next to a dumpster in the middle of nowhere -- abandoned, hot, dehydrated, and sharing living space with a whole host of unwanted guests. Maybe this is hard to believe, but Tikki actually got his name before caregivers noticed several ticks on his body. And then noticed several more after that. And then a whole bunch more after that… No wonder he was scratching and howling!

That first day, they removed a whopping 50 ticks. They were everywhere, including down inside Tikki’s ears and in between his toes. (The next day, they found 15 more.) After a week, thank goodness, all his ticks and other medical gripes were taken care of. It’s always impressive when a dog like this, who has been so forlorn, ends up being the happiest little guy on the planet. To meet him, you’d never know what he’s been through. He practically squishes his whole body right through the fence just to say hello to a total stranger.

With a clean bill of health and his immunizations in order, Tikki will soon go from cardboard box castaway to top star of the Best Friends puppy class. Things might have started out rough, but just you wait and see how this guy will win over the crowds. He’ll be a celebrity in no time!