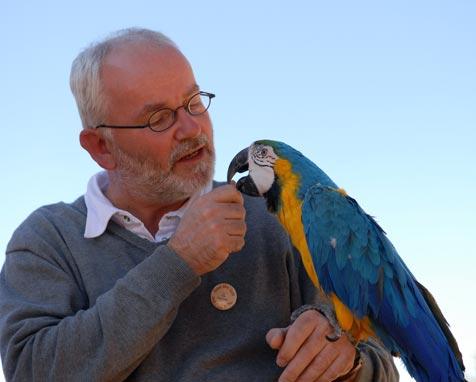 Many of the unhealthy behaviors that parrots adopt are the result of how we relate to them, according to world-renowned avian veterinarian and behaviorist Dr. Jan Hooimeijer.

By learning about how parrots behave in the wild, understanding what their body language says, and acting with respect in our relationships with them, we can help prevent or modify the neurotic, aggressive and other unnatural behaviors that the birds acquire in captivity.

As part of its commitment to maintaining and enhancing the health and well-being of the animals living at the sanctuary, Best Friends recently invited Dr. Hooimeijer to visit.

In his seminar, "Handling Parrots and Dealing with Behavioral Problems," Dr. Hooimeijer imparted a wealth of knowledge about parrots that kept many of Best Friends’ animal care staff furiously taking notes and asking questions.

Dr. Hooimeijer is the owner of an avian clinic in Meppel, Netherlands; the founder and president of the Society of Parrot and Parakeet Welfare; and the founder and president of the Avian Healthcare Company. During the seminar, he stressed the importance of keeping in mind that pet parrots are captive wild animals, and that many of their behaviors in captivity can be understood by knowing how they behave in nature.

"Parrots are prey animals. That’s the key for their basic behavior in nature," he said.

Equally important to remember is that parrots perceive humans as predators, because we, unlike them, have eyes that are front and center on our faces. By simply standing near a cage and looking straight at a bird, we can make the bird feel threatened and insecure. And insecurity is the cause of many unnatural, neurotic behaviors such as biting and feather plucking, behaviors that are often the reason many people surrender their parrots.

Dr. Hooimeijer says it’s crucial to know when a bird is feeling insecure, and body language is the best indicator. It’s also crucial to watch our own body language around birds, or else we could unknowingly contribute to a bird’s psychological decline by "posturing" in ways that intimidate the bird.

"When we don’t understand their body language and act improperly," he says, "we create insecure behavior."

Dr. Hooimeijer says that many people make the mistake of viewing parrots in the same adoring light as we do dogs, cats and other domesticated companion animals. And that’s hurting the parrots. "Birds don’t need our love – they need our respect," he says, "and that’s based on knowledge."

An advocate of positive-reinforcement training methods, Dr. Hooimeijer says birds require freedom of choice at all times, especially in training. Domination, which he calls "the dark ages" of animal training, runs counter to their nature.

"Free choice is natural," he says, "and it’s natural to make choices. Domination doesn’t make sense because there are no dominant males or females in nature." In other words, there are no alpha birds in a parrot flock in the wild.

Steve Scheurich, operations manager for the Parrot Garden and the Bunny House at Best Friends, says, "Dr. Hooimeijer’s techniques are based on the high intelligence level of the birds. So many other handling methods are based on coercion and force. I believe his way of kindness and respect coincides with the Best Friends way."

Become a Best Friends member to help birds in need