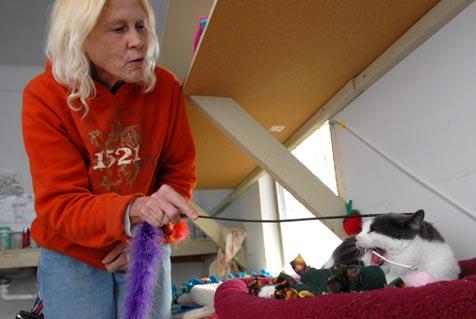 Sherry Woodard remembers one particular tortoiseshell cat that Best Friends rescued after Hurricane Katrina in 2005. Little did she know how well this memory would serve her during the Great Kitty Rescue in 2007.

"That Katrina cat was incredibly nasty and aggressive, lunging at everybody, attacking anyone who cleaned her cage," Sherry recalls. "We all thought this was a feral cat. And then one day, the woman who owned this cat found her photo in the database of found Katrina pets and came to our rescue center. We all held our breath while she reached into the cage, but the cat clearly wanted her to pick her up. Safe in her mother’s arms, now anyone could pet that cat."

Last July, with that memory in the back of her mind, Sherry and a Best Friends rescue team drove out into the blistering Nevada desert to a troubled "sanctuary" for "feral" cats. Best Friends had been asked to help when Nye County Animal Control in Pahrump, Nevada, seized possession of the cats.

When the team first arrived, the cats were in horrible shape, both physically and emotionally. They were sick and undernourished; they ran from people, cowering under bushes, darting from one building to another.

There were some cats who were able to trust people once they had food, clean water, clean litter boxes and TLC. In hindsight, we know those cats were the newest arrivals at the compound, and they were easily adopted.

But there were hundreds more who needed a lot more help. Sherry says, "Take cat number 744: Peekaboo. I never saw her in the yard, not for months and months. It wasn’t until after we rounded up the remaining cats into the buildings and could say for sure who was who that we found her. Once she was ‘safe’ inside a building, though, she was terrified. But, using the socialization techniques we developed, we were able to help her overcome her fear and she turned out to be sweet, sweet, sweet."

After months of dedicated work by staff and volunteers, most of the cats have been adopted or are in the care of good rescue groups. But the work has only begun for about 100 of the most frightened of these cats, who have been brought to Best Friends now that the Pahrump facility has finally been closed.

The socialization techniques that Sherry, Shelley, and the rest of the team developed were born out of necessity. "Somewhere along the way, I looked at all these cats – cats who still did not trust anyone – and thought about what their future would be," Sherry says. "I realized there was nowhere for them to go. We had to do whatever we could to give them the best chance at a home."

Sherry continues, "We tried everything we could think of to help these cats and came up with this system." They call it "Miss Sherry’s Finishing School for Felines."

How does it work? First, the cats are confined to small cages. Then, working with one cat at a time, a caregiver insists, gently and persistently, on making contact with the cat – first with a feather wand, then gloved hands, then bare hands, followed by slowly picking up and holding the cat for some lap time.

The approach is individualized for each cat, and the team members pay very close attention to changes in the cat’s "language" – such as eye blinks, licking of lips, and body posture. When the cat gets comfortable with one step in the process, it’s time to go to the next step.

The techniques developed by the Great Kitty Rescue team are based on routine, repetition, slow and gentle movements, small progressions from one step to another, and ending each session on a positive note. Using the socialization techniques, Sherry believes that practically any cat can be returned to house-cat status with gentle, persistent persuasion.

"We are also animals, so we just have to convince the cats that we are good animals," Sherry says.

Sherry and the rest of the Great Kitty Rescue team invite everyone to become part of this extraordinary work. Sherry says, "We are going to create an entire package of videos, tip sheets and articles that will be available to everyone who wants to use these techniques."

The Pahrump kitties at Best Friends can provide a golden opportunity to learn the techniques. Sherry says, "We are looking for very special volunteers to come to Best Friends, learn these steps, help us get these cats ready for homes – and take what they’ve learned back to their rescue groups.

"We are also looking for adopters who will commit to these steps, who will do their part and keep the cats in a cozy space so that they can succeed and then join the rest of the family once they’re comfortable being house cats.

"This isn’t for everyone. For some people who love cats, the cage idea is hard to take. But we’ve seen this process work over and over again – and cats from the Great Kitty Rescue are in homes as a result."