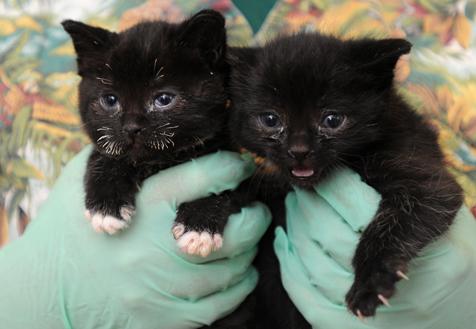 Two men were outdoors working on a prescribed burn when an utterly terrifying sound, given the circumstances, reached their ears. They heard the frantic meowing of kittens. The men rushed to the source of the crying and found two terrified little kittens, a brother and sister, tucked away in a hollow. The mother was nowhere nearby.

Thank goodness the kittens weren’t injured severely. Things could easily have been so much worse. As it was, Amber, the sister, was only singed a bit around the edges. Her brother, Phoenix, didn’t appear injured at all. Whew!

Amber has a moderately burned paw, which, while it appears to be tender at the moment, is not too serious medically. What a relief! She also ended up with quite the whisker trim from the heat of the fire. Additionally, her fur is somewhat matted in places from the high temperatures.

All in all, though, her injuries are nothing a little medical care and TLC can’t help. From all signs so far, Amber doesn’t look like she’ll experience any permanent damage from the fire. As for her brother, he was even luckier. Phoenix doesn’t seem to have been close enough for the heat to cause any problems. 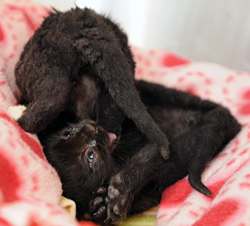 The kittens’ ordeal has not exactly been an idyllic way to start their life! The two siblings are only around four weeks old. Once rescued from the fire, the kittens were rushed to Best Friends for medical attention. Again, thank goodness these adorable survivors didn’t end up requiring critical care. What they did need, however, was regular bottle-feeding right from the start, in addition to eye cleanup and other various care consistent with such young kittens. They went home at night with cat caregiver Susan Richmond.

At first, the kittens were a little nervous around people. It didn’t take long, though, Susan explains, for that to turn around. "They’re not scared of people at all," she says now.

Amber and Phoenix have made swift and steady progress in the short time they’ve been at the Sanctuary. They’ve nearly reached the point where they can eat on their own, and Amber’s burn damage is healing nicely. Obviously, Phoenix and Amber went through quite the scary ordeal. At the same time, they also landed in the perfect place to find their way again safely.

It won’t be long before they’ll start bouncing around with a bucketful of kitten mischief and energy. As for Amber, she insists she’s already working hard on growing her whiskers long again.

Best Friends has some of the most amazing adoptable cats! They range in age and temperament. Adopt a cat today.

Join the Best Friends' cat initiatives to learn more ways you can help the community cats of your area. You can also volunteer to help cats at the Sanctuary, in your community or from your home. Get more information on how you can start helping cats today.