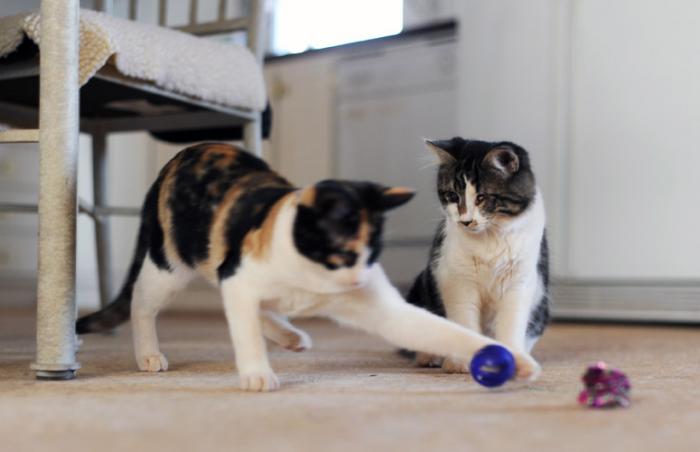 In the story of Hansel and Gretel, the children lay down a trail of bread crumbs in hopes to return home after a trip into the woods. Hansel and Gretel the kittens didn't follow that plan. After leaving where they came from, they've never looked back.

Of course, that's not surprising considering they started life in a trash-filled ditch. Lucky for them, trappers from Best Friends' Free Fix L.A. program happened to be in the neighborhood.

While return is typically a component of TNR, these kittens were in rough shape. Not only were the four-week-old siblings really sick, but a virus had severely damaged their eyes. Return was out of the question. It was like a fairy godmother had come to their rescue.

Much-needed TLC and a foster home for two kittens

Young and in need of medical attention, Hansel and Gretel came to live with volunteer foster Linda Mathess. Lucky for her, she had some excellent help.

After bottle-feeding the foster kittens, her cat, Pikachu, took over head-to-toe grooming duties. Afterward, he'd snuggle in bed with the kittens. Linda's five other cats helped as well.

"It's as if they all realized these kittens were needy," says Linda. "They were special. All the cats seemed to embrace them and play with them."

It's like they had their own staff of kitty nannies.

Two months into fostering, Linda had a family emergency so Sandra Levinson took over. The initial plan was to sequester them until they became accustomed to their new environment. However, Sandra says they adjusted very quickly and that didn't last too long.

Despite their eyesight issues, the kittens acted like … well, just like kittens. The pair would play-wrestle and have fun with interactive toys. The best toy, though, in Hansel's opinion, was Linda's hair. "He would just go after it like a hairdresser," laughs Linda. "He was hilarious."

However, when it comes to fostering, all good things must come to an end. Linda only had Hansel and Gretel for three weeks because they were accepted to come to Best Friends.

Blind kitten and kitten with vision impairment come to the Sanctuary

Though the siblings had been admitted to Best Friends, space was not yet available for them. Thankfully, there are caring folks who step up to help in such situations.

Kris Lichtenberg, a former Cat World caregiver who now works in landscaping, has been caring for the pair since coming to Utah.

Turns out, Gretel is quite fetching — and not just her adorable calico looks. She actually retrieves.

"She plays fetch, says Kris. "It's just amazing. She'll actually get up on my lap, drop the crinkle ball, I'll throw it, [and] she'll go get it. She might play soccer for a minute and then she'll bring it back to me — over and over and over again."

The pair has now been with Kris for about a month. Soon, Hansel will have a surgery to remove one of his eyes. He's basically blind, and Gretel has vision impairment. However, the way they adapt and act, you'd never know.

Though Hansel and Gretel don't have a cottage made of kitten kibble bricks with sisal columns and catnip shingles, once they have homes of their own, like their namesakes, their lives will indeed have a fairy tale ending. They'll live happily ever after.