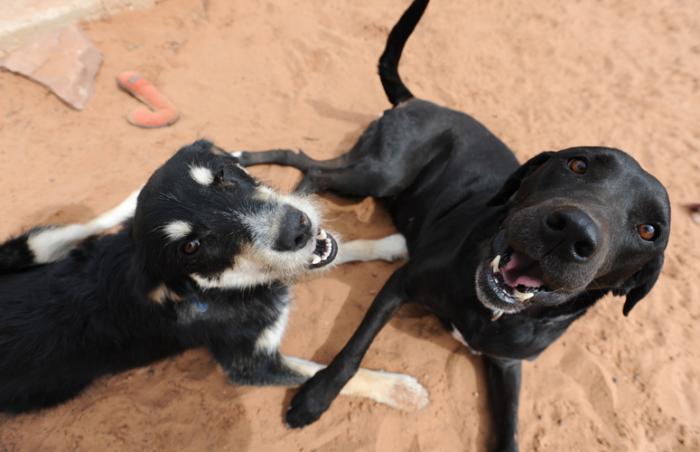 Two dogs with health challenges become the best of friends 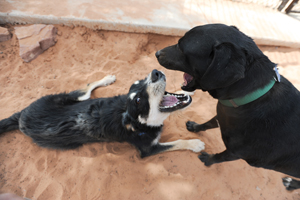 Gibson and Delaney the dogs couldn’t fit in any better at Old Friends, the area of Dogtown where senior dogs go to get a little extra pampering and help with age-related health issues. It’s a place where older dogs can ease into their retirement years while they wait for a forever home. But Gibson and Delaney aren’t seniors.

Gibson, at a year and a half, and Delaney, at five and a half years old, have had a run of bad luck, health-wise. But together, they’re overcoming these setbacks. And, while they’re in recovery, they’ve really come to enjoy each other’s company and having someone to lean on.

Gibson came to the Sanctuary back in November after being hit by a car and left for dead. The poor guy was in really rough shape. He’d lost sight in his left eye and sustained a severe hip injury. On top of all that, Gibson was suffering from brucellosis, a serious bacterial infection.

Because of the brucellosis, Gibson was facing several long months of recovery requiring him to be quarantined to avoid spreading the infection to healthy dogs. And, while he’d get plenty of love and affection from Dogtown caregivers, he’d miss the company of another dog. That is, until his friend-to-be, Delaney, came along and changed everything.

Delaney arrived at the Sanctuary from a Humane Society in Tennessee exactly one week after Gibson. She, too, had seen better days and was a bit of a medical mess. Besides a torn ligament in her knee, she had heartworm, which threatened her life. Before heartworm treatment could begin, however, Best Friends vets found that Delaney also had another issue that would have to be treated first — brucellosis.

If Gibson and Delaney were both going to be quarantined, the timing couldn’t have been any better. Because they had the same illness, they were able to live together, staying side by side day and night for three and a half months. Along with the excellent veterinary care they received, their budding friendship helped both dogs defeat brucellosis and move on to conquer their next health challenges. 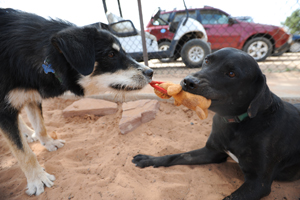 For Delaney, that meant going through heartworm treatment. Although she was feeling well enough to run around and play with Gibson, the two had to be separated for several weeks. That way, Delaney could rest and let the treatment take effect without putting her health at an even greater risk.

Now Delaney, who is heartworm free, has been reunited with Gibson and they both face one last health battle. Delaney will have a procedure to repair the torn ligament in her knee, and Gibson will have surgery on his hip. By now, though, the two dogs know how to take these things in stride and greet each day with a smile. Once they’ve had their surgeries, they know they’ll get better together. Until that day comes, they are living their lives — romping, playing, and showing their senior friends how it’s done.

Consider a donation to bring hope and healing to more animals like Gibson and Delaney.