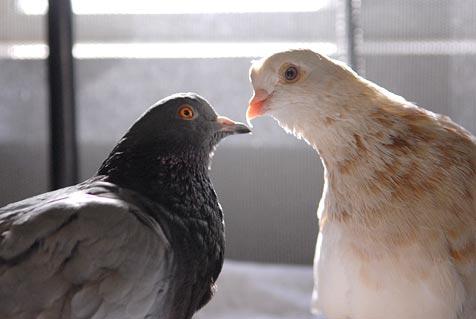 One of the pigeons is, neurologically speaking, a bit challenged. The other is kind of peculiar looking. And though they were once ostracized by their respective flocks, they have been inseparable since meeting each other.

Christy and Slippers have both been at Wild Friends for well over a year, but the two had never laid eyes on each other, at least not until they both wound up in quarantine together.

Wild Friends is home to approximately 100 adoptable pigeons who live in two separate aviaries. Christy lived in the aviary reserved for what Wild Friends calls its "special needs" pigeons, a small number of birds whose physical limitations prevent them from thriving in the larger pigeon aviary. Best Friends took Christy in because of a neurological problem that causes her to hold her head to one side and lose her balance easily. She is normally able to roll over and get back up when she falls, but one morning she was found lying on her side, with her head pressed into the dirt, unable to right herself.

"It appeared the other pigeons had been picking on her," says Best Friends’ wildlife rehabilitator Barbara Weider. "It may have been because Christy was sick."

Barbara and Wild Friends’ manager Carmen Smith realized Christy was sick when they brought her in that day. They weighed her and found she was severely underweight. She was not eating enough to survive. So Barbara and Carmen had to feed her by tube for several months while treating her for coccidia, a type of parasite. They feared Christy might not make it.

In the meantime, Christy stayed in quarantine, where she could be more easily monitored and not exposed to the outside elements. At the time, temperatures were falling well below freezing at the Sanctuary.

"Some pigeons do very poorly in temperature extremes," Barbara says.

Like Christy, Slippers doesn’t do well when the weather turns cold. And again like Christy, he’s a loner, perhaps because he has an unusual array of feathers on his legs and feet, which make him appear as though he’s wearing slippers (hence the name). He has no physical problems and lives in the main pigeon aviary, but instead of staying warm with the other pigeons inside their heated nest area, he often preferred to stay outside at night. The caregivers noticed he was fluffed and shivering in the mornings.

Knowing Slippers wasn’t fitting in and was freezing at night because of it and considering that Christy was probably feeling quite lonely in quarantine, Carmen and Barbara decided to try a little experiment. They placed Slippers in quarantine with Christy — just to see how they would get along.

The experiment could not have been more successful. The two bonded almost immediately and now cannot seem to get close enough to each other.

"They are always smashed against each other," Barbara says, laughing. "They are always cuddling. And if they hadn’t both had health problems at the same time, they never would have met."

Since they united, Christy’s health has been on the rebound, and she is finally eating enough on her own. Barbara and Carmen no longer have reason to fear the worst. Far from it.

The special care that the Sanctuary is able to provide is made possible by people like you! You can help create these happy endings by sponsoring one of the residents at Wild Friends.