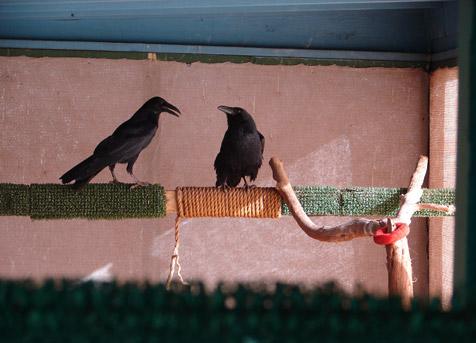 They arrived with a pair of sunglasses. No, no — not to wear, just to play with. "They were the most playful ravens I’ve ever known," says Barbara Weider, licensed wildlife rehabilitator at Best Friends.

The two young ravens had experienced a couple of mishaps early in life. One had had his flight feathers clipped. The other had an old wing injury that needed to heal. Debby Pappos, a licensed wildlife rehabilitator in Northern Utah, had taken them in, and in her excellent care, they were both making progress. She asked if they might come to Best Friends to benefit from Wild Friends’ long flight aviary, the largest in Utah.

Playful ravens released back to wild

In addition to playing tug-of-war with the sunglasses, the birds also played with some rings on a peg, which they found to be endlessly entertaining. When they were moved up into the big flight aviary, little by little, they got used to playing with wild toys instead — mostly twigs and branches.

They were never tame or "imprinted" to humans, which can be a serious threat to wild animals and can even make them non-releasable.

Recently, both ravens were released together, fully feathered and fully flighted.

Another wild patient, a lovely Western bluebird had been found in the road with a leg injury. Birds need both feet to perch, and they also use their feet to scratch in the ground or along tree bark to find food. Carmen Smith, manager of Wild Friends and licensed wildlife rehabilitator, expertly splinted the bluebird’s leg.

He spent some of his recovery time housed with two other songbirds for company. One, a house finch (that’s the name of the species), had been caught by a cat. (Building a completely enclosed outdoor run will keep your cat, as well as birds and other small creatures, safe.) Suffering from a head wound, systemic infection, and trauma to her beak, she had to stay in rehabilitation for quite a while to be sure her beak didn’t develop some sort of malformation that might prevent her from eating normally after she was released. Finches have to crack open seeds, which are their main diet, so their beak needs to work perfectly.

The third companion in this trio was a spotted towhee. He’d also been caught by either a dog or a cat, and had broken tail feathers, so he had to molt, then grow them back again.

Broken feathers are more serious than they sound since a wild bird must have perfect flight in order to survive, find food, and escape from predators.

The three songbirds were released early on a beautiful spring morning down near Kanab Creek. All are now happily leading lives of freedom, as nature intended.

How you can help wildlife

If you find an orphaned or injured native wild bird or other wild animal, please call a licensed wildlife rehabilitator right away, who can let you know the best way to help the animal. For help in finding a rehabilitator near you, call Best Friends’ Wild Friends at 435-644-2001, ext. 4460. There’s an emergency number for after hours. Thanks for caring for our feathered friends.