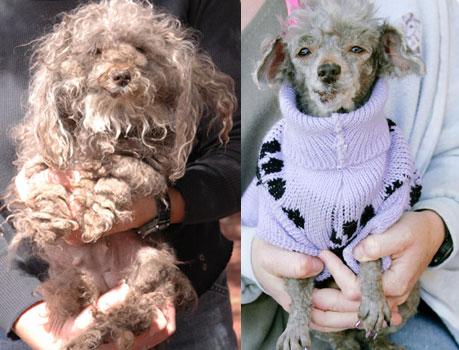 Please don’t tell her. But Babette was considered so ugly that her Nevada shelter wouldn’t even show her to the public. She was going to be put to sleep without a showing, but Best Friends stumbled upon the secret "ugly dog" in the back room. And the result? Just five days later, the "ugly duckling" is in a happy forever home – proving she was beautiful enough to be loved all along! (Aren’t we all?)

Babette was born with a deformed jaw that makes her face look sort of funny, and as you can see, she came to her Nevada shelter with a painfully matted coat. Otherwise, there’s nothing wrong with her. She’s in good health, likes cats, likes other dogs; she’s gentle and loves to be carried around everywhere she goes. She’s not even as old as her funny face makes her look -- just five, actually, which is young for a seven-pound dog.

Best Friends had a foster home available for a "small dog with no serious temperament or health problems." So we sent a scout to Babette’s shelter to see whether any dogs who fit the profile were in danger of being put down. At first, our scout was told, "No dogs like that here!" But then she happened upon a different employee who admitted there was one in a back room, scheduled to be put down yesterday until they ran out of time, but ...

It was Babette the ugly dog!

Hey, beauty’s in the eye of the beholder! Our scout described Babette on the phone to the foster mom, who said, of course, that she would be just fine! So to everyone’s surprise and delight, Babette was swept off the euthanasia line and driven to a foster home near Best Friends. Gail Kaminsky (the Best Friends groomer) groomed her, put bows in her hair, and even painted her nails.

Adopted into a home of her own

Then, just five days later, she was adopted to a permanent home nearby, proving our ugly duckling was a swan all along. Congratulations, Babette!

So remember, if you’re good with a comb and you want to save a life, volunteering to bathe and groom dogs at your local shelter is a great way to give hope to ugly ducklings like Babette who are just dying to show they’re ready to swim with the swans.