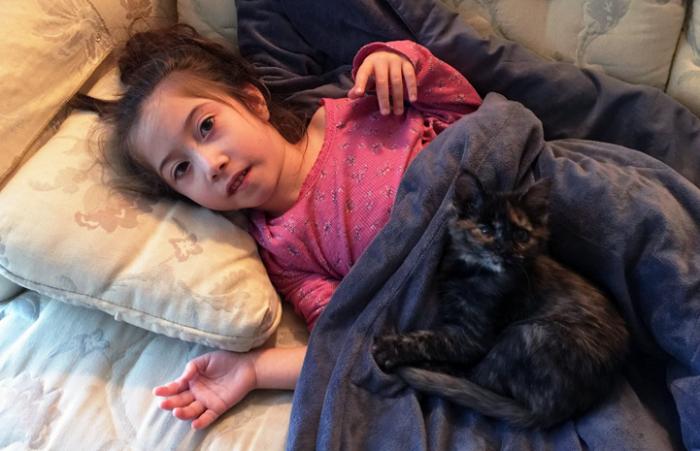 Unconditional love between girl and kitten 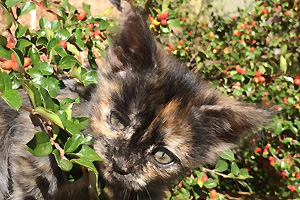 ​Skeeter is a tiny survivor who recently became part of a family that needed her just as much as she needed them. It all happened at the Best Friends NKUT Super Adoption in Salt Lake City, Utah, where Skeeter and nearly 400 other pets found homes. The little kitten was in the right place at the right time to join a family of survivors just like her.

An orphaned kitten in need

Skeeter was one of eight one-month-old kittens orphaned after a car struck their mom. Weighing just five ounces and suffering severe dehydration, Skeeter was taken into a foster home with Paws for Life, a Utah rescue group and member of Best Friends’ No-Kill Utah (NKUT) Coalition. In her foster home, Skeeter received some serious TLC that included subcutaneous fluids and a special formula diet, in the hope that she would thrive.

Over the course of the next seven weeks, Skeeter caught up with her siblings in every way — size, curiosity and the ability to knock things off tables. Everyone thought Skeeter was ready to make her debut at the upcoming NKUT Super Adoption, but in the end, she did much more than that.

One in a million: A grey and orange kitten

When the two-day event opened, hundreds of adoptable animals purred, played and generally turned up the charm for potential adopters. Jordan Tolstedt and her young daughter, Neji, had been there most of the day searching for just the right pet, but began to suspect that they had not seen them all. Little did they know that one particular kitten had more in common with them than they ever could have imagined.

Neji, whose name means “survivor” in Tunisian, was turning six years old in a matter of days, and Jordan really wanted to find her the perfect cat. The new family member would have to be a special cat who was not afraid of Neji’s wheelchair or Neji, who was born with cerebral palsy after Jordan barely survived a terrible car accident during her pregnancy.

Jordan knew her daughter had her heart set on either a grey or an orange kitty, but hours after arriving, they still hadn’t felt a love connection. Then, just as they were preparing to leave, Jordan spotted her  — a four-month-old kitten who just happened to be both grey and orange. 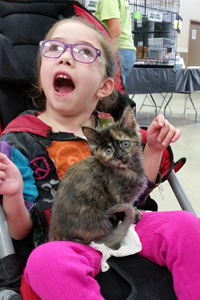 As soon as Jordan wheeled Neji over, Skeeter hopped right up into her lap like she’d been there many times before. “Neji immediately began nodding her head ‘yes’ over and over,” says Jordan. “Her eyes widened, her mouth rounded and she just nodded and nodded. I started crying because I’d never seen her with an animal she loved like that before.”

Indeed, there wasn’t a dry eye in the house.

"It's always exciting to see the huge number of lives saved at these super adoption events," says Kim McDaniel, Best Friends–Utah communications manager, "but emotional adoptions like this remind us why we love doing this work."

As they left together, Skeeter climbed right up to perch herself on Neji’s shoulder. During the car ride home, you couldn’t peel Skeeter off Neji’s lap. On the first night in her new home, the little kitten curled up in bed next to Neji, and has become her new best friend. When Neji came down with an ear infection soon after bringing home her new kitten, she had a constant snuggle buddy who never left her side.

Skeeter finally has it made. She’s now got her very own home where she can keep growing up, safe and loved.