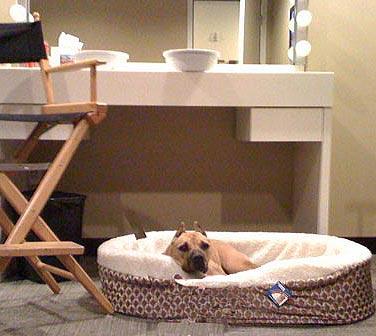 It’s not surprising that Georgia, who was rescued in NFL player Michael Vick's dogfighting bust, found her way into people’s hearts.

And now, the Vicktory dog has found her way on to the Ellen DeGeneres Show.

Ellen was so impressed with Georgia and the work that Best Friends does to help animals like her that she and her spouse, Portia de Rossi, are giving a personal donation to Best Friends Animal Society in lieu of holiday gifts for their family and friends. Ellen is encouraging others to do the same this holiday season.

Georgia is one of 22 of Michael Vick's dogs who came to Best Friends after being rescued from the former Atlanta Falcons quarterback’s Virginia property, home to an illegal dog-fighting ring. Vick is now serving a 23-month prison sentence on a federal dog-fighting conspiracy charge.

Georgia has come a long way since arriving at Best Friends last January. Her scarred body showed signs of having had many litters and all her teeth had been pulled, possibly so she could be forcibly bred. Her ears had been cropped and her tail had been broken several times. And there were emotional scars, too. When Georgia first arrived at Best Friends, she was so traumatized that she didn’t trust anybody. Then, she made special friends with John.

With loving care and attention from John and other Dogtown caregivers, Georgia has come out of her shell and today she's just enjoying being a dog. She loves belly rubs and playing with her toys, and can usually be found walking around with a bone in her mouth. And, she’s learned to trust people.

The season two premier of the National Geographic Channel's series, "DogTown," featured Georgia along with Cherry, Meryl and Denzel, three other Vicktory dogs, as they began their journey toward healing with the help of John, Dogtown co-manager Michelle Besmehn, trainer Ann Allums, veterinarian Patti Iampietro and other dedicated staff at Best Friends' Dogtown. The episode, titled "Saving the Michael Vick Dogs," will be rerun at 7 p.m. MT on December 28.

All this attention has turned Georgia into quite the celebrity. She has even graced the cover of the New York Times. And last July, she traveled to Los Angeles, donning a pink rhinestone collar befitting a jet-setting diva, to appear at a press event promoting the "DogTown" series. She was the toast of the town, as everyone wanted to pet her and give her a belly rub. And she loved every minute of it.