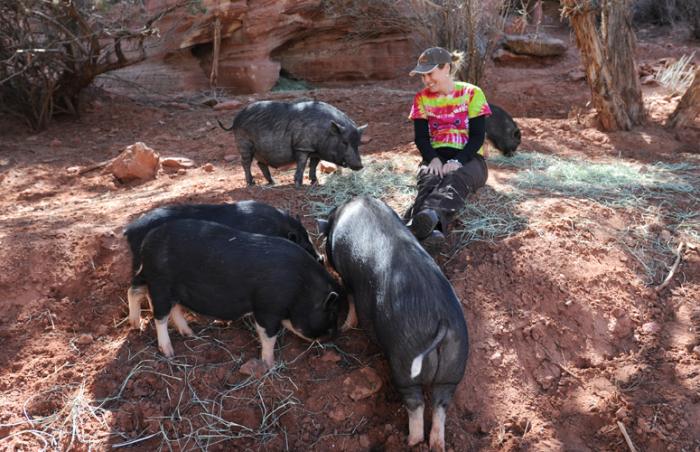 Volunteering at a pig’s pace

Brooke Alexander didn’t expect to fall in love when she came to the Sanctuary for the first time to celebrate a milestone birthday. But that was four years ago, and, since then, she’s come to Best Friends twice a year, every year, to volunteer. Now, she’s not only found her niche here, but she’s helping other volunteers do the same.

Home away from home with the pigs 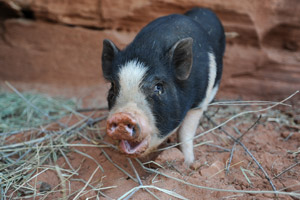 During her first trip in 2010, and her next few visits, Brooke explored the Sanctuary and beautiful Angel Canyon. She volunteered at least once in every animal area, but kept finding herself drawn back to Marshall’s Piggy Paradise, which has become her home away from home.

That’s because Brooke is totally in love with the pigs – particularly Doogie. The shy, little, blue-eyed piglet was her project during her most recent visit. For four days, she knelt beside him on the ground, talking softly to him until he trusted her enough to let her pet him. Finally, he rolled over with a big smile on his face and let her give him a belly rub as the sun warmed his skin. Now, he runs up to the gate when he sees new visitors, hoping for more of the same.

Moving at a pig’s pace

Besides helping to socialize pigs like Doogie, Brooke helps with daily chores, such as preparing meals, doing dishes, scooping poop, and changing water. Since she knows her way around Marshall's Piggy Paradise so well, she serves as a volunteer team leader whenever she’s here. Along with the staff, she greets new volunteers and shows them the pigs’ posh community-living arrangement. She also encourages visitors not only to love on the pigs, but also to enjoy the calm, relaxed atmosphere at Marshall’s Piggy Paradise, and to “move at a pig’s pace.”

Brooke’s trips typically last a week to 10 days – just long enough for her to unwind, reconnect with her piggy friends who are still here, and make a few new ones, like Doogie. But, when she gets home to Dallas, Texas, Brooke doesn’t stop helping out. She’s found plenty of ways to stay involved and get her pig fix from home.

Happy as a pig in mud 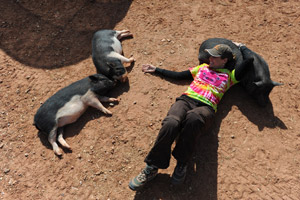 When she’s not making colorful bio cards for the Sanctuary pigs, or gathering items on the Marshall’s Piggy Paradise wish list, Brooke is sharing the knowledge she’s gained at the Sanctuary to help educate the public about pigs and dispel negative stereotypes about them.

“With the exception of the phrase ‘happy as a pig in mud,’ pig quotes are really quite negative,” Brooke explains. She’s already changed the way she speaks, and is helping to change hearts and minds of others. “If I hear someone say ‘pigs are dirty animals,’ ” Brooke says, “I explain to them that pigs are actually clean and wonderful animals. I love them so much and am thrilled to be helping them.”