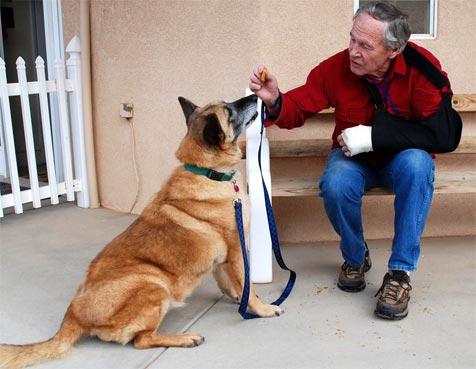 Here’s a guy who knows how to stick to his goals. Jim Shields of San Francisco, California, had always wanted to visit Best Friends Animal Sanctuary. One problem, though. Jim and his wife run a dog rescue (Grateful Dogs Rescue) in the Bay Area and it’s not easy for either of them to get away. Yet after some world-class juggling, Jim was able to balance his schedule and free up a whole week for visiting Best Friends. Full steam ahead!

Ready to be put to work volunteering

He arrived on Saturday afternoon and got all settled in at the Best Friends cottages. Sunday morning Jim took the sanctuary tour. The tour was great and all but Jim really wanted to volunteer. Enough with the looking around stuff, he said. "Put me to work!" Immediately following the tour, Jim headed down to Kanab, the town near the sanctuary, for a quick lunch. His plans were to come back after lunch and start his week-long volunteer vacation in the afternoon.

Thing is, Jim had a bit of a mishap in town. He slipped on a patch of ice and landed hard, breaking his wrist! Instead of volunteering like he’d planned, Jim spent his Sunday afternoon in the local ER. But here’s where Jim surprised everybody. Instead of changing his plans, perhaps by visiting the national parks nearby or something else less physical, Jim showed up bright and early Monday morning to volunteer anyway.

Jim wasn’t about to scrap his hard-earned plans. He spent the entire week walking and socializing the Best Friends dogs, even taking them on sleepovers. Everywhere he went Jim heard the same ol’ thing. Nobody could believe he still wanted to work with a busted arm. To Jim, though, it made perfect sense. "What else was I supposed to do?" he’d say. "Go home early and ruin my trip?"

Now that’s what you call a determined Best Friends volunteer! A big thank-you from all the dogs – and get well soon!

Of course, most people who volunteer at Best Friends have much less 'eventful' experiences than Jim's -- we promise! To learn more about visiting, please see our visitors' section.