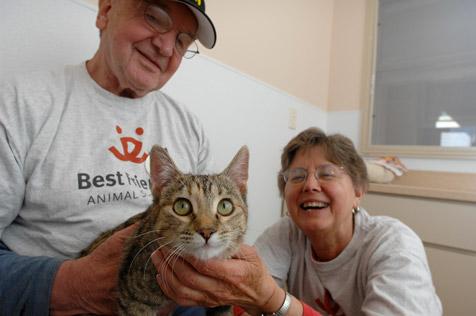 Like many people who volunteer away from home for large chunks of time, Donald Ahlas and his wife, Sandy Batalden, often receive bewildered reactions from those around them. "Our neighbors think we’re a little crazy," Don says with a smile.

Retired schoolteachers, Sandy and Don put in as much time on the road volunteering as they spend back at their own home in Iowa. Over the years, they have been campground hosts, national park tour guides, and Habitat for Humanity volunteers. They have even spent time in the Peace Corps. 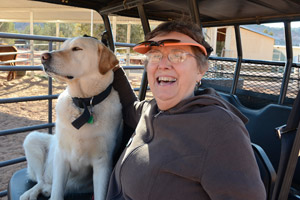 Sandy takes Cody for a ride.

Last year, they branched out a bit. While they’ve given more tours through national parks than you can shake a stick at, they hadn’t ever volunteered at an animal rescue. They discovered Best Friends on days off from volunteering at Pipe Spring National Monument, about a 30-minute drive from the Sanctuary.

They had such a great time last year that this year they decided to come directly to Best Friends and volunteer full-time for two months solid. Volunteering for animals is a change of routine for them, but one they’ve taken to with enthusiasm. "We love it," says Sandy.

Sandy and Don split their time between the cat and horse areas of the Sanctuary. Don, who used to feel a little nervous around horses, has since learned to love their company. They also discovered an added benefit of volunteering with horses: the exercise. "We don’t have a health club out here," Sandy jokes. Mucking pastures is all the exercise they need.

In love with the animals 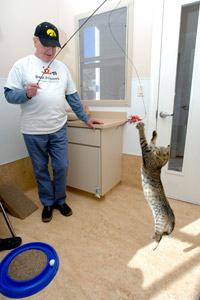 Cricket gets some exercise thanks to Don.

There’s another draw for Don and Sandy when it comes to volunteering for animals. "We’ve always had cats, until about two years ago," says Don. When their last cat passed away, they were reluctant to bring a new one into their lives because they are gone so often. As it turns out, most of the housing areas they stay in at the national parks don’t allow pets. So, the animals at Best Friends have become their pets-away-from-home. They especially love Rio, a cat who came to Best Friends unable to use her back legs, but who has made tremendous progress. They’ve also enjoyed socializing some shy kittens.

This won’t be their last trip to Best Friends. "I’m sure we’ll return," says Sandy. In fact, they’re already planning three months next year. Don has a great way to sum up their approach to life: "We want to wear out, not rust out," he says.

There’s nothing crazy at all about that kind of philosophy, no matter what the neighbors think.

Visit and volunteer at the Sanctuary

Interested in planning a trip to the Best Friends Sanctuary? Get info on visiting, taking a tour, and volunteering.