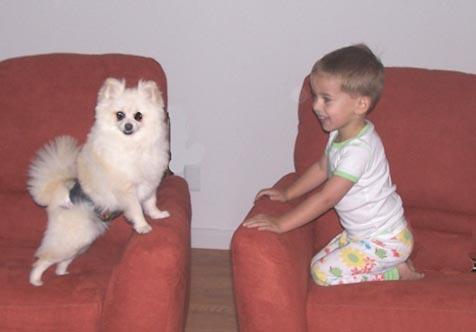 Angel’s story is the latest in an ongoing series that updates the progress of rescued animals featured in previous Best Friends stories.

JoAnn DeStio Tubiolo and her husband, Frank, have "installed" a new floor in their den to accommodate Angel, the Pomeranian they adopted last year.

Yes, the entire floor is now covered with disposable plastic pads used to absorb animal urinary mishaps. Although in Angel’s case, they’re not so much mishaps as they are routine "waterings."

Outside the den, JoAnn fits Angel with his bellyband, a kind of harness that holds an ordinary pad to keep him from peeing all over the place.

On top of that, Angel also has a heart condition. JoAnn says the medical bills over the past year have topped $1,000.

Still, JoAnn and Frank say Angel is the greatest addition to their family and they can’t imagine their lives without him. "He’s brought so much love into our lives," she says. "He’s king of the house."

That’s quite a leap from his first five years, living alone in horrid conditions in a small cage.

Angel was among 179 dogs that Best Friends rescued from a Virginia puppy mill in October 2007 and brought to Pets Alive Animal Sanctuary in New York.

JoAnn read about the arrival of the dogs in the paper and decided maybe it was time to adopt a puppy, even though she and Frank swore they’d never get another dog. "We had Sheba, our beloved Pomeranian, for 16 years. She passed away last February and it broke our hearts."

A dog requiring love and patience

JoAnn didn’t know anything about puppy mill dogs before bringing Angel home. She didn’t know, for instance, that it would take Angel a day to master walking up stairs and a week to learn how to scamper back down. Toys would remain a mystery for a good week or two. For months, Angel shied away from his reflection in the mirror.

Now, Angel runs around like a puppy. JoAnn says watching him learn how to be a dog proved interesting for the most part, but it was also painful waiting for Angel to come to understand the concept of love.

"It took a full six months before Angel would stay in my arms when I picked him up," she says. "He had never had any human contact and it took him awhile to learn to trust us."

Now Angel loves everyone (except other dogs). He has already taken two trips to Florida and JoAnn says he’s a great travel companion.

But he will always be The Dog That Pees. To that, JoAnn says, "Yeah, so what?"

"You know, I read about the animals in shelters up for adoption, and I read the reasons why people bring them in – they’re moving, they can’t bring a dog to their new apartment. I mean, what are these people thinking?

"We love Angel, issues and all. I couldn’t imagine bringing him back to Pets Alive after the first week, let alone after five years, like some people do with their pets. And I think because of where Angel came from and all he went through, the love he gives back is beyond anything you could imagine. We’re so lucky to have him in our lives."