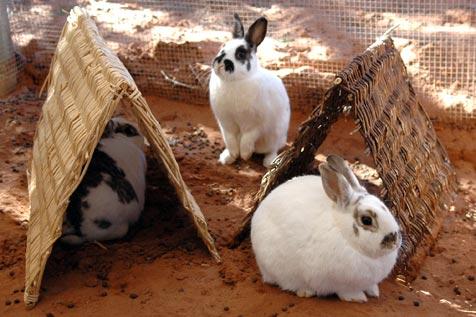 Wouldn’t it be cool if jungle gyms at the park were made out of pretzel sticks? Forget for a moment that they wouldn’t be structurally sound and if you tried to climb them, you’d plummet into a pile of splintered snack shavings.... Just enjoy the idea that a recreation area could double as a snack haven. Glorious! According to the rabbits at Best Friends, that’s the only way to go.

Thanks to Best Friends members, the rabbits recently received some new items from their wish list: wicker tunnels that look like A-frames. For the rabbits, these delightful tunnels are a combination vending machine and luxury hotel. They love to lie down inside, and when the mood strikes, nothing is more fun than nibbling away at the walls.

Too bad the wicker isn’t really a nutritious food source—more like rawhide for bunnies, but maybe that’s a good thing in the long run. After all, you don’t want them to eat their little houses all up! Instead, the rabbits are thrilled to have something to chew on whenever they wish.

The A-frame tunnels are a big hit with all the bunnies. Perhaps no group enjoys them more than the eight rabbits living in a separate building called the Rabbitat. The Rabbitat is a separate part of the Bunny House reserved for a group of extra-shy rabbits. They came to Best Friends from an awful situation in which hundreds of rabbits were dumped in a California public park and were living wild there.

Peeps, Robin, Jelly Bean, Spring, Aileen, Piper, Tulip, and Liz were eight of the 500 or so rabbits trapped in this park. Because they had special needs, these eight came to Best Friends, and they’ve never really trusted humans. They’re gradually working on that, but in the meantime, they sure like the toys caregivers bring them.

The Rabbitat bunch love these tunnels in particular. They seem to feel safe and cozy in the tiny bungalows. This group may not want human interaction very often, but they sure know a good playground when they see one. All the rabbits send out a big thanks for members who make their lives a little brighter every day!

You can also check out rabbits available for adoption.