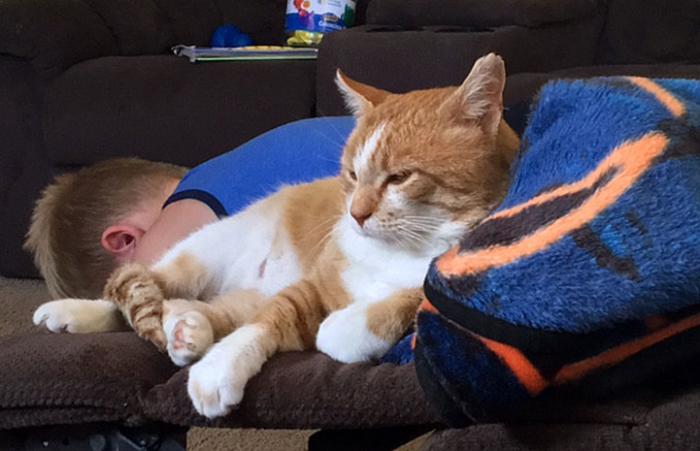 Best Friends has network partners in every single state, and all of them are saving lives daily. We never get tired of hearing their stories, and that’s why we want to share them with you, too. So today, we're proud to present one from Wild Blue Animal Rescue and Sanctuary, in Colorado Springs, Colorado. 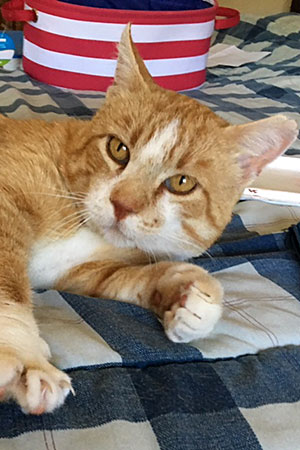 When Lisa Bitterman contacted the staff at Wild Blue Animal Rescue and Sanctuary, a Best Friends No More Homeless Pets Network partner in Colorado Springs, she was in search of cat to join the family. But she had a request, and it was an important one. As the mother of a son with autism, she needed a cat who could adapt to the family’s active lifestyle and stay cool and calm — specifically around her son.

As the team at Wild Blue heard Lisa’s needs, they knew they had the perfect cat for her family — one who would work well as a pet for children with autism. “Happy Harry is your guy,” they said without hesitation.

The cat they had in mind was living as a stray on the streets before being rescued by a shelter that named him Dirty Harry, because he was filthy when they found him. When the shelter discovered he carried the feline immunodeficiency virus (FIV), they worked to get him accepted at Wild Blue. They knew if Wild Blue couldn’t find Dirty Harry a home, he could live at Wild Blue’s sanctuary for the rest of his life.

A cat with FIV gets a loving home

When Lisa and her husband arrived at Wild Blue, they were admittedly a little skeptical about the recommended cat — renamed Happy Harry by Wild Blue for his jovial disposition. After all, the rescue staff had answered so quickly and with such confidence, how could they be so sure this was their perfect cat? But as soon they saw how sweet, calm and gentle the ginger tabby was, they knew without question that he was their guy.

They were so sure that when the Wild Blue staff explained to them that Happy Harry had FIV and might need a bit of extra care to stay healthy, they never wavered. It was clear that Harry’s forever home was with them.

Cats and autism: Harry steps into his role as a therapy cat

Even though Lisa was confident in her decision to adopt Happy Harry (now known simply as Harry), there was still something worrying her after she brought him home. Would Fred, her young child with autism, feel comfortable around Harry? Like most people with autism, Fred sometimes has a difficult time relating emotionally to people and pets.

Fred had shown little interest in the family dog, a Great Pyrenees named Zelda. And Lisa, an artist, figured that Fred’s reaction to Harry would be similar: basically, very little reaction at all. Of course, she had no way of knowing that the cat she’d just adopted would know the way to her son’s heart.

Child with autism lets his guard down, thanks to a new friend

After spending the first few days adjusting to his new home in the safety of Lisa’s studio, Harry grew brave enough to explore the house and meet everyone in his new family.

Harry approached Fred for the first time by stopping several feet away from him and sitting, watching him. Then, he calmly walked over to Fred and waited. Soon after, Fred did something he had never done before: He reached out and petted the cat.

“It was just amazing to see,” says Lisa. “I think at that moment we knew that this was the real deal. Harry knew how to connect with Fred.”

Special-needs friends help each other grow and heal 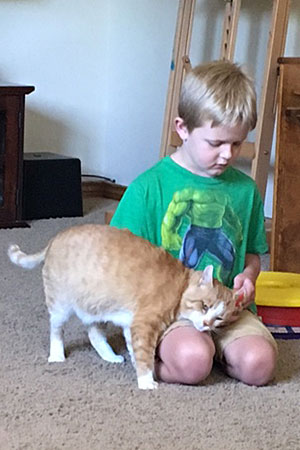 It took just about a month for Harry and Fred to become great friends. And Lisa says that ever since Harry has been a part of Fred’s life, he is much more receptive to others, including the dog. When Harry approaches Fred and asks to be petted or wants to crawl into his lap, Fred happily obliges.

Harry has come a long way from his days as a stray on the streets. Today, he helps his young friend who has autism learn how to better relate to the world around him. And it appears Fred is helping Harry, too.

The fact that Harry has FIV never crosses Lisa’s mind. Harry is an otherwise healthy cat. And besides, the benefit of watching Harry open up a new world for Fred has been priceless.

“Harry is getting more relaxed in his new home,” says Lisa. “And Fred is much more relaxed and social now that Harry is here. He’s a wonderful cat.”

Wild Blue draws inspiration from Best Friends Animal Sanctuary and has created a safe place in Colorado Springs for homeless cats and kittens. Some, like Harry, have FIV or other medical conditions, and while they get the care and attention they need at Wild Blue, they also get the same chance to find homes as otherwise healthy cats.

“Adoptions like Harry’s are what Wild Blue is all about,” says Lauri Cross, the organization’s executive director. “We believe there is a home out there for every cat.”

Best Friends’ No More Homeless Pets Network comprises more than 1,600 animal welfare groups from every single state, all working to save the lives of pets in their own communities. Ranging from animal shelters and rescue groups to spay/neuter and trap-neuter-return (TNR) organizations, network members collaborate with Best Friends to save even more lives in every corner of the country. Best Friends provides marketing help, fundraising events, information and webinars, guidance, grants and more so that, together, we can Save Them All.