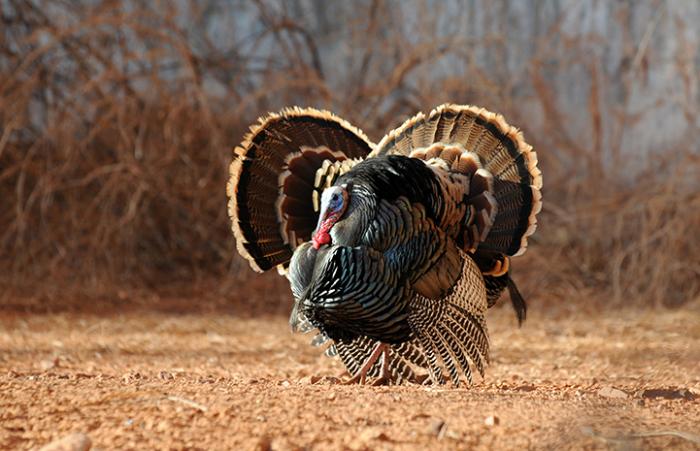 A flock of wild turkeys gathered in the tree over the koi pond. Three bold turkeys then decided to sample the berries on the Virginia Creeper vines that grow along the railing on the balcony. In honor of this unusual trio of visitors, we’ve included some wild turkey facts in this article.

Snood: The flap of skin hanging from their beak.

Wattle: The bumpy skin on the neck.

Beard: A bundle of special long, thin feathers on a turkey’s chest.

Roost: Turkeys can fly into trees to roost at 2 weeks of age, some have flight abilities as early as 10 days. They stay close to the mother to keep warm, since the young are growing new feathers and also for protection. They spend the first 2 weeks under her wings and tail at night. Turkeys also like to roost over water for extra protection from predators.

Running: Turkeys prefer to run, rather than fly. They can move up to 20 - 25 miles per hour in short sprints – faster than an Olympic runner.

Flying: Turkeys are also great fliers for short distances. They can elevate like a helicopter – moving almost straight up. And they can move very fast when flying straight ahead. One wild turkey was clocked at 60 miles per hour!

Flocking: During the winter, turkeys gather in separate flocks, the hens in one and the toms in another. As a flock, they are able to protect each other, with at least one bird always on the lookout for danger.