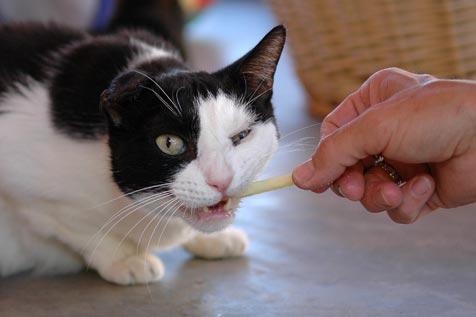 Winning over a feral cat with food

Once upon a time Junior was a genuine, bona fide, steer-clear-of-humans feral cat. Then a lady brought him into her life and cared for him from a distance. They had an iffy relationship until the day the lady discovered a secret weapon. A force of nature, if you will, that has brought many a man and woman to their knees when they’ve tried to resist its cruel dictates.

The power in question, and the single bond between Junior and his resourceful mom was this: French fries. Junior loves French fries. Lives and dreams of his next golden, crispy slice of deep-fried Heaven. It may not have been the healthiest treat, but … it was their only way to bond! When Junior’s mom moved and worried about who would continue to feed this feral cat, Best Friends agreed to take him when there was an opening, and when she brought him, she passed along the secret of the fry. It’s a good thing, too. When Junior first hit the scene, he still wanted nothing to do with people. That feral instinct sticks around a long time, you’d better believe.

And yet a funny thing happened. After caregivers and visitors have used this trick of the occasional French fry (very sparingly, of course) to make a connection with Junior, he slowly came to decide that the people behind such a benevolent gift couldn’t truly be all that bad. Over time his defenses shrank and shrank until now all it takes is about one single fry, and you’re in for a first-class cuddle session with a former bad boy. He even takes them from small kids. How’s that for a turnaround?