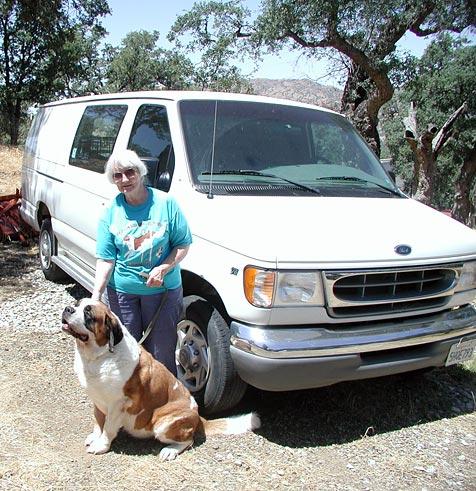 There are many ways to share kindness in this world. Just ask the humane education staff at Best Friends. They recently received a generous gift that had been on their wish list for over three years.

Training dogs keeps them in their homes

But first, a little background. Dogs can often lose their homes because of behavioral issues. Most of these problems can be resolved with training, something that Joseph Johnston of Tehachapi, California, noticed time and again. When Joseph retired, he and his wife, Nancy, would show their Saint Bernards. In the process, Joseph saw how many animals out there lose homes unnecessarily. He made it his mission to train dogs so that fewer would end up homeless.

Donating a van to Best Friends

Then Joseph became sick. His illness drained their financial resources and eventually he passed on. But even so, Nancy still wanted to carry on her husband’s wishes to educate people about pet care. Her financial resources were small, but she heard that Humane Education at Best Friends was in need of a van. She had a Ford E250 with 55,000 miles. Did they want it?

Boy, did they! Humane Education staffers often drive people around the sanctuary, from visiting college students to teenagers. Sometimes they host projects that require wheelbarrows and shovels. In truth, as they put it, "A van was better than money." Nancy, thank you!

Learning about donating a car or other vehicle to charity.