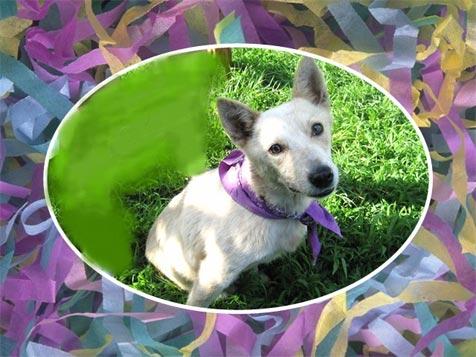 Sue and Rob Arnold rescue dogs and cats and take them to their farm. But in the case of a badly injured dog, she found them. And just in time.

Sadie, injured and partially paralyzed, now has a forever home, thanks to the Arnolds and the efforts of Best Friends’ Animal Help department and the Best Friends Network.

The saga began in June when the Arnolds were hauling a tractor down a rural road in eastern Oklahoma. They saw a dog on the side of the road but couldn’t stop. Once they reached their destination and unloaded the tractor, they returned to the spot, hoping she would still be there. They didn’t have to look far.

Sadie, a heeler mix, "flagged us down – literally," Sue says. "She was planted in the middle of the road as if to say, ‘I am not taking "no" for an answer. Take me home.’"

The Arnolds obliged. Sadie was obviously hurt, but they didn’t know how badly. They put a blanket around her, picked her up and drove her home.

Caring for a dog in need

Once home, they saw that she had inflamed sores on her rump and the tops of her feet, caused from dragging herself on the ground. They called their vet. He advised them to keep her quiet, give her water and food, and let her rest so she could begin healing. They also gave her an anti-inflammatory and pain medication.

But that’s not all that was wrong. The next day, when Sue gave Sadie a bath to remove caked-on mud from her body, she discovered a bullet wound. Then Sadie developed a high fever, so they rushed her to the vet. The bullet had entered and exited, fracturing a vertebrae, which caused the paralysis. The vet suggested a sling, to elevate her so her wounds could heal. As soon as her husband was able to rig a sling, they took Sadie home again.

It was touch and go, with Sadie’s sores flaring up. Sue and her husband have a farm to run and Sue works full-time, plus they care for 30 dogs and 20 cats they’ve rescued. Sue had recently been through back surgery and, after they took Sadie in, Rob had a medical scare. Caring for a special-needs dog was becoming overwhelming.

Reaching out to Best Friends

So, Sue reached out to the Best Friends Network. Marti Lombardi, a volunteer coordinator for Best Friends, posted Sue’s plea for help on the Network’s Oklahoma community page. Then Marti contacted Best Friends’ Animal Help department, and specialist Kathleen Burke got the case. Kathleen tried to get help, and through a contact, Pets with Disabilities donated a cart, a wheelchair for dogs.

In the meantime, Kathy, a reader in Canada, saw Marti’s post about Sadie on the Network site. After many conversations and e-mails back and forth between Sue and Kathy, Sadie went to live with Kathy in Canada. She even arranged for physical therapy for Sadie.

A home for heeler dog in Canada

Rob drove Sadie to Canada in early August. "Rob was very, very impressed with Kathy, and we both feel like Sadie got a wonderful forever home," Sue says. "She is mastering the wheelchair really well and just sails around."

Sue could not be more grateful to Best Friends.

In an e-mail to Kathleen, Sue writes, "Thank you so much for your kind words, but most importantly, thank you for encouraging me that there were people out there who would like to adopt a paralyzed dog.

"At my lowest, you gave me a glimmer of light at the end of the tunnel. Please keep encouraging people. You are providing a very needed service."

Photo of Sadie compliments of the Arnolds