Image
A dog who is reactive to other dogs but is fabulous with kids is left at the shelter but then is adopted into his perfect home.
By Cathy Scott

When Best Friends Los Angeles programs’ staff went to an L.A.-area shelter to pull dogs and cats for an adoption event, they noticed a friendly dog named Johnny. Even better, they learned that he especially loved children because he had once lived with a young girl.

The family’s circumstances had changed, so they’d left Johnny at the shelter. L.A. programs, however, gave Johnny the second chance he needed by pulling him for the upcoming event.

But he was not adopted that day. Once at the event, it soon became evident that this handsome tan-and-white boy, who had been so friendly with people, was reactive toward other dogs. Johnny, they realized, needed to be an only dog.

Search for home for dog who needs to be only dog 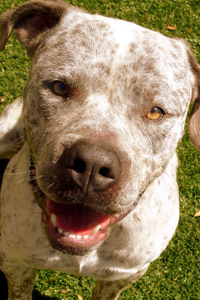 Rather than take Johnny to another event, they "networked him," as adoptions and volunteer coordinator Robin Harmon describes it. That meant publicizing Johnny any way they could — online via Petfinder and Facebook, on paper flyers, and by word of mouth.

The technique worked. A family, whose dog had recently passed away, saw one of Johnny’s photos online and just had to meet him. Soon after, when they met him in person, they instantly fell in love.

Now at home with Freddie and Heidi Bedford and their two daughters, Delilah Grace and Savannah Lee, Johnny has been renamed Houla. He has become so much a part of the family that when they went on a five-day camping trip with friends, they took Houla with them.

On their vacation, "he hung out with 15 kids," Heidi says, and at night, he sat at their camper door, watching over the kids, and he wouldn’t go to sleep until Heidi and Freddie settled in for the night. "Then he would get onto the bed and go to sleep," she says.

For the Bedfords, he could not be a better fit. "Houla," his new mom reports, "is the perfect dog for our family. He's taken over our girls’ princess couch as his bed, even though we bought him three new ones of his own. He has definitely settled in."

Thank goodness, Robin says, for Houla’s strong connection to children: "The thing that most helped him is that he’s so good with children. He loves the little girls in his family."

As it turns out, she adds, "His first home ended up being the perfect preparation for his forever home."