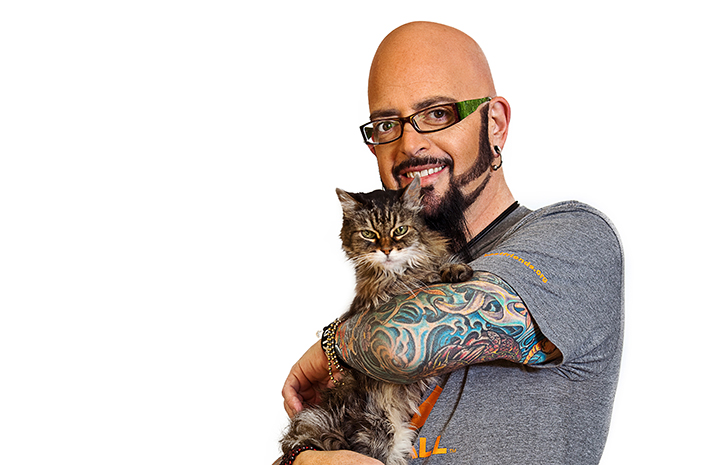 In addition to being the star and executive producer of Animal Planet’s “My Cat from Hell,” Jackson also has deep roots in animal welfare. He worked in an animal shelter for almost 10 years and specializes in environmental and behavioral enrichment in a rescue setting.

Jackson’s first book, “Cat Daddy: What the World’s Most Incorrigible Cat Taught Me About Life, Love, and Coming Clean,” tells the story of how his work with animals helped him overcome drug addiction and personal hardships. His second book, “Catification,” was published in late 2014.

Jackson is also the president of Jackson Galaxy Solutions, a line of holistic remedies for animals formulated by a holistic veterinarian and animal behaviorist.

Dedicated to raising awareness and promoting adoption, Jackson generously shares his “cat mojo” with multiple animal welfare organizations, including Best Friends Animal Society, in an effort to Save Them All.

His work with the Humane Society of Boulder Valley made him aware of the harsh reality of animal homelessness and simultaneously convinced him that the idea of a no-kill country could become a reality. He recently launched a ‘Team Cat Mojo’ campaign to attract those who want to build a community focused on making life better for all animals.

To support this effort, Jackson is launching the Jackson Galaxy Foundation with the goal of cultivating a world where all animals are afforded more rights.

"I resonate deeply with the Best Friends Animal Society mission and the way they go about achieving their goals. I take my position as ambassador very seriously, as I do the concept that we can Save Them All, one at a time.”