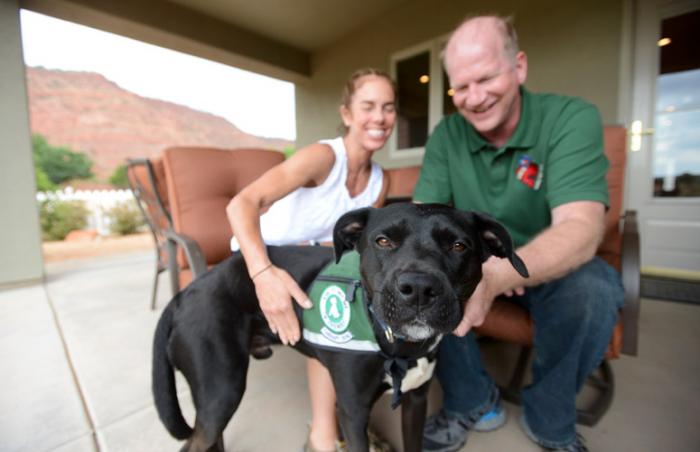 Adopted black Lab puppy trains to be a therapy dog 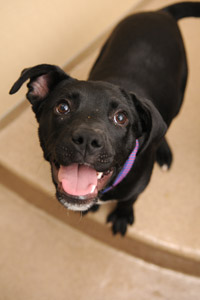 Sarah and Randy Farmer had come to Best Friends two years in a row to volunteer. But they were never looking to adopt a pet; they already had two elderly dogs and a cat at home. But, in 2010, the Farmers returned to volunteer in Dogtown, and the third time turned out to be the charm.

On that serendipitous visit, Randy's first job as a Dogtown volunteer was to walk a puppy named Tide. Tide had been seized from a hoarding situation by the Los Angeles County Department of Animal Care and Control, who reached out to Best Friends for help placing the four-month-old black Lab mix and his littermates, Surf, Coast, Reef and Oasis. Randy took an immediate liking to the pup, so he and Sarah decided to take him on an outing. Happy to be with the Farmers, Tide won their hearts by falling asleep on Sarah's lap.

During that first encounter, Randy remembers thinking that Tide would make a great therapy dog. Now at home with the Farmers in Lincoln, Nebraska, that's exactly what he is. His formal training officially began with the puppy preschool and socialization classes he took during the three months he spent at the Sanctuary. Sarah said that he had much to learn - but that he was eager to learn it. This is something that the Farmers, both educators, could appreciate.

Tide first had to learn to relax a little bit. He was terrified by loud noises and by simple things like a trash can in the driveway. There was a transition period of nearly a year, while he was adjusting to life as a family pet. Now, Tide can handle loud noises, and he's learned to chill out a bit. He is also very good and respectful with other dogs, including the two very elderly cattle dogs who stuck around for Tide's first few years with the Farmers.

During his adjustment period, Tide was also in training. He completed three levels of obedience classes, an agility course, his Canine Good Citizen (CGC) test, and the certification program at Healing Heart Therapy Dogs, in Crete, Nebraska. Randy says that Tide is truly "a superstar at everything he does." So far, he has gone to a home for Alzheimer's patients and to local colleges during finals. Randy, who is the principal of the school at a local juvenile detention center, took Tide to work with him a few times and noted a profound, positive effect on the kids. As for Sarah, she would love to take Tide to the Lincoln public schools, where she teaches high school English. 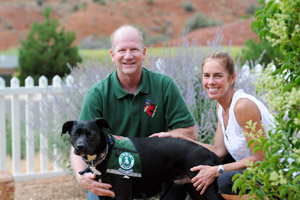 Tide and the Farmers are also educating people in the local community. "We love telling people where Tide came from," Sarah says. "It gives us the opportunity to talk about Best Friends and pit bull terriers," since Tide looks like he might be part pit bull terrier. Also, Tide is black, so the Farmers inform people about the plight of black companion pets in shelters. They think of Tide as an ambassador for big black dogs.

Both Sarah and Randy are tremendously proud of Tide, who has become something of a neighborhood celebrity. He also got a great reception when he traveled back to Best Friends this past July. This time, the Farmers were actually looking for a new pet - a sister for Tide. After several meet-and-greets, the family chose Dizzy, another young Lab mix. They have a feeling that Dizzy is going to be a superstar like her older "brother," and they are going to start training classes with her right away. But they also know that Tide will be a great teacher and role model, that she will learn a great deal from him, and that rescued dogs can make the best "therapists."