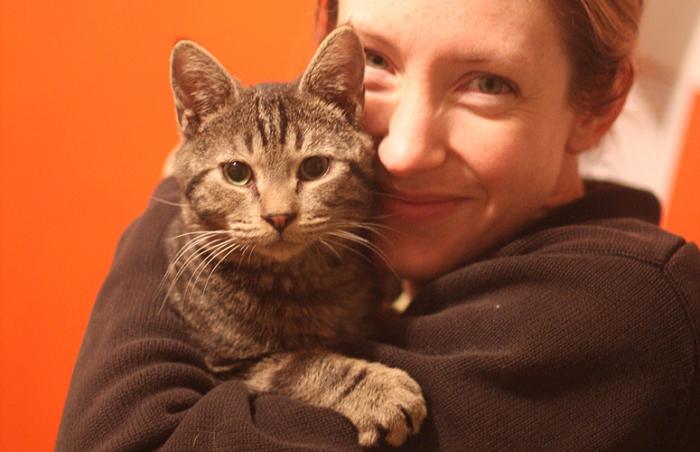 On February 9, 2013, the city of Albuquerque's shelter system celebrated its one-year anniversary of not killing any community cats (feral and/or stray felines). Desiree Triste Aragon, Best Friends' community cat coordinator in Albuquerque, snapped a photo of the rows and rows of empty cages at the city's Westside Shelter. Best Friends Animal Society shared it on our Facebook page, and thousands of likes, shares and comments later, it's unanimous - everyone is over the moon with the community cat program's success.

Best Friends has been given a grant from PetSmart Charities to partner with the Albuquerque Animal Welfare Department to bring a three-year trap/neuter/return (TNR) program to the area. By fielding local nuisance calls and working to get cats fixed and returned from whence they came, the program is keeping community cats out of the shelter system. Desiree and Jayne Sage are the two Best Friends employees on the ground who help the program run smoothly - but it's the volunteers who really help make the program as effective as it is in saving so many lives.

The program also helps educate people on the virtues of TNR and helps get them on board, too. Shannon Clark is one such volunteer who came to the TNR table because of the program. She had found a cat who was quite malnourished, dehydrated and in all-around bad shape.

"I was walking with some friends and heard some mewing and looked down to see a cat that was in such rough shape. I knew I had to do something," shares Shannon. "I took him to the veterinarian who didn't think he would make it. But we knew we would do all we could to see if Arthur could recover."

While Shannon was going back and forth to the clinic to see how Arthur was doing, she saw a lot of work being done on behalf of many community cats. She was intrigued. It turns out, the more she heard about the community cat program, the more she wanted to get involved. Now she's one of their best volunteers, even after Arthur made a full recovery and was adopted into a loving home.

"It makes me feel so good to be a part of this program," Shannon says. "The impact is clear - you see empty cages at the shelter for weeks at a time, and you know you're working on something that is producing results. This program is good for the community, both the animals and the people."

"The animal control officers have really gotten on board to support the program. Beyond giving us the complaint calls, now if they see a free-roaming cat when they are making their rounds of the neighborhoods, they give us a call to let us know where a potential colony that needs TNR is located," enthuses Desiree. "And our program is also getting such an overwhelming positive response from the public. It's so exciting to see it happen almost overnight."