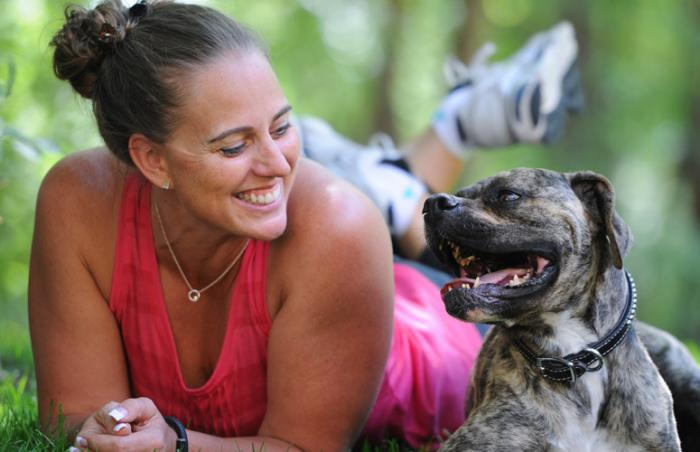 Alfie's ability to race around a yard, or leap up into the back of a Chevy Tahoe, might lead people to believe he is just a normal dog. In fact, there are barely any signs that Alfie wasn't always the active and healthy dog he is now. But his vitality is truly a testament to the amazing work that Alfie's caregivers and adopted family (not to mention Alfie himself) have done the past two years. And, recently, a triumphant Alfie returned to the Sanctuary to visit those who have helped him get to where he is today.

As a puppy, Alfie was abandoned on the streets, gravely ill. A good Samaritan rescued him, and he later came to Best Friends, where vets discovered that he was suffering from two life-threatening viruses - parvo and distemper. The diseases left Alfie with severe head tics and two very weak front legs. 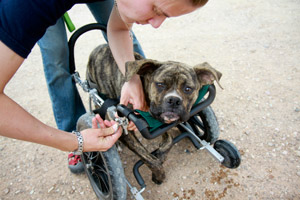 "The Little Alfie That Could"

But Dogtown caregiver Haven Diaz never stopped believing in the dog he nicknamed "The Little Alfie That Could." Haven says, "Alfie has a fire and an inner light. He wasn't going to let his disability hold him back." Alfie received top-notch care at the Sanctuary. He went to hydrotherapy to help him gain strength in his front legs, he got a custom-fitted cart to help him get around, and his caregivers padded his room with blankets since he had difficulty keeping his chin off the ground. And, of course, he received a lot of love in addition to the special care. Volunteers and staff members alike melted over the sweet puppy whose spirit was stronger than his body.

And then Alfie met the Duford family. Lynette Duford had followed Alfie's story on the Guardian Angel section of the Best Friends website, and was particularly touched by a video featuring him and Haven. By the time she came to the Sanctuary to meet Alfie, Lynette was pretty sure she wanted to adopt him. She just had to convince her husband, teenaged children, and Princess Olivia, the family's Chihuahua, that it would be a good idea. Although it was hard for the family to imagine bringing such a special-needs dog into their home, they opened their hearts just the same.

Back home in Polson, Montana, Lynette, who owns a gym, began taking Alfie to work with her. In the spring of 2012, she started working with him using an exercise ball. She would place his chest on the ball and roll him gently from side to side until he began catching himself with his left front leg. By the end of the season, he could leap up and sprint on three legs for a few seconds before crash landing on his chest.

All throughout that summer and fall, Alfie got stronger and stronger, and he finally began to show some strength in his right front leg. He could then stand long enough to drink out of his water bowl, his muscle tics began to decrease in frequency, and he could hold his head up for longer stretches of time. Though Lynette had worked extensively with Alfie, she also credits Arnold, the family's American bulldog, for his improvement. The two dogs bonded instantly, and Alfie was determined to use his legs to run after Arnold.

A most miraculous transformation 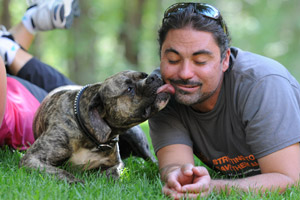 Part of the reason Lynette wanted to bring Alfie back to the Sanctuary was to show people that it was worth saving him - and that other dogs in his predicament should be given a chance. When the Dufords came to Best Friends in August, just 20 days shy of Alfie's two-year adoption anniversary, his caregivers were overjoyed to see him. Haven called it the "most miraculous transformation" he'd ever seen, while caregiver Deb Turner says, "It's amazing what his family has done for him."

But Lynette thinks that she and her family are the lucky ones because Alfie has given them "more empathy for special-needs dogs and people" and a deeper "understanding of what it takes to be a caregiver to the disabled." To other families considering adopting a special-needs pet, Lynette advises, "Once you have decided that you have the physical means and resources to take care of the dog, do it. Jump in if your heart is telling you to, and don't look back."

Learn more about Alfie's journey and watch a video.