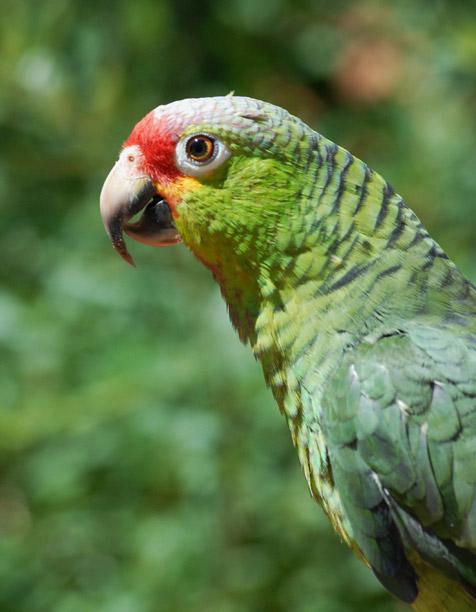 In a world where waiting around is often the order of the day, from grocery store checkouts to driver’s license renewal lines, it’s nice to know that once in a while some things — even great things — can go lickety-split fast. Sam the Amazon and Sidney the African gray both found their "happy ever afters" before they had time to fully settle in at the Sanctuary.

When new animals come to Best Friends, they’re kept separate from the main population until they’re cleared medically. For the parrots, they actually stay in a building some six miles away from the Sanctuary until they finish their quarantine period. As it turns out, these two parrots never even made it up to the main part of the Sanctuary! Their happy endings came a-knockin’ before they could even get dressed for the day, so to speak.

With Sidney, however, while she might have found her forever home in a flash, it wasn’t nearly so fast for her new family. Richard and Terry Teller of Las Vegas, Nevada, have been wanting to adopt an African gray from Best Friends for several years. Until now, they’d never met the right bird.

When they first came looking at the Sanctuary a couple years back, none of the grays seemed like the right fit. As with any animal, it’s always important to make sure the adoption is a good fit, perhaps especially so with parrots, who can live a human lifespan!

Though they didn’t find a gray during that first visit, they did find a match in Daisy the Moluccan cockatoo. They decided to adopt. The next time they came looking for a gray, RB the red-bellied parrot ended up going home instead. In all this time, Terry and Richard never gave up thinking about an African gray possibly joining the family. While they hadn’t connected with one in the past, it didn’t mean they couldn’t still do so! Once they heard about Sidney, they knew they had to meet her.

Easier said than done, this time. They headed out on Friday to come meet Sidney, a trip that normally would be a three-hour drive. Between one wrong turn and, more importantly, multiple bouts of car trouble (involving two car tows and repair work), Richard and Terry didn’t reach Best Friends until Sunday. Not that they were ever deterred. "We've come this far!" said Rick more than once when they thought about going back. Adds Terry, "If we had to walk, we would have walked." They wanted to meet Sidney no matter what!

All the hassle ended up being worth it. When they met Sidney, it was that classic case of love at first sight they’d hoped for for so long. "She's just terrific," says Terry. "She really is the perfect fit." Back home, Sidney — who had proven herself quite the chatterbox at Best Friends — has picked up Daisy’s cockatoo screech, the dog’s howl and a hundred other sound effects and phrases around the house. She’s certainly making herself at home! Sidney gets the run of the place, and takes every opportunity to cruise around on the floor and check things out. She’s one happy camper, as are Rick and Terry. "I'm loving this bird," says Terry.

As for Sam, the other bird to find a happy ending quicker than you can say "adoption application," he caught the eye of Myra Williams from San Diego, California. Myra had never been to Best Friends before, and came with the hope of finding a bird to adopt. Though it may have been her first trip, it certainly won’t be her last. "What an amazing place," she says. "I have told everybody that they have to go to Best Friends!"

She wasn’t disappointed in her hopes to adopt, either. When she spent some time with Sam, that’s all it took. Myra was head over heels. "Sam is just cute," she says. "He’s got that kind of sassy attitude that my first Amazon had."

His lovable goofball attitude has only blossomed as he’s spent time in his new home. You see, Myra lives up in the mountains, with all sorts of wildlife visiting on a regular basis. Sam loves nothing more than to chatter with the locals through his favorite window, which is often left open when the weather is nice.

Sometimes the birds respond back, but the deer and other critters give him blank looks. Tragically, the crow Sam has his eye on hasn’t yet responded favorably to the wolf whistles he keeps tossing out the window with reckless abandon. (Keep it up, Sam! The crow can’t ignore you forever!) There’s one other bird in the house, LT the cockatiel. These two also jabber back and forth throughout the day.

Sam shows a little more personality all the time. Whether it’s checking out one of his several play pens or creating new ways to let the world know he’s large and in charge, Sam is one contented guy. "He’s a great bird," says Myra. "Each day he’s exploring more and doing more."

So take heart, all you who have a dream somewhere on the horizon. If Sam and Sidney are any indication, some happy endings come about much sooner than you might expect!

Add one of our feathered friends to your home. Check out the adoptable parrots that are ready to go to their forever homes, today!