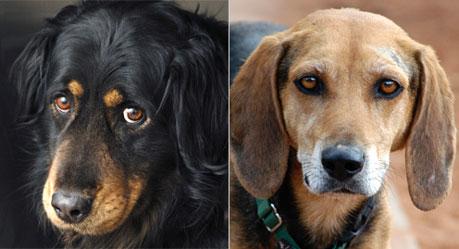 Animals from a domestic violence situation

The gentle love and kind words from Dogtown staff is just what Bubba and Jade so desperately need. These dogs were rescued from two different domestic violence cases.

While women’s shelters are making inroads into providing safe haven for the pets of battered women, there is not enough room for all the animals in these sad situations.

Living at the end of a chain, soulful Bubba was one of many animals trapped in an abusive environment. The battered woman finally got the courage to have the man she lived with arrested after 10 years of abuse.

Animals in an abusive situation

Her next call was to the Best Friends Network. Her son was coming to get her, she said, but he lived in a one-bedroom apartment and had no room for her pets -- three other dogs besides Bubba, and five cats. Utah rescue groups answered the Network call. The other dogs went to Animal Oasis in Brigham City. Pet Samaritan Fund took two cats. The other three cats, Beaners, Arielle and Scratchy, are at Best Friends; they are doing well and are ready for good homes.

Bubba showed clear signs of abuse. It took a long time for his rescuers to persuade him to get into the van. Once at the sanctuary, the medical staff discovered he had a cancerous tumor that had to be removed from his chest. Bubba’s prognosis is good, though. Despite the hard life he’s lived, Bubba is a sweet boy who thrives on kindness.

Then there is precious Jade, who was adopted from Best Friends a few years ago. Stephanie Keltner, a Dogtown staff member, remembers that Jade would cower in a corner of the run and only approach people in a belly crawl.

A woman fell in love with this truly timid dog and took her home. Recently, though, the woman showed up at the sanctuary with Jade. She was fleeing a bad situation and did not dare leave Jade at the house to face the man’s wrath.

"Whatever else has gone wrong in this woman’s life, she did right by Jade. She really helped Jade come out of her shell. She’s still a shy dog, but she will let you pet her. She’s a hound mix and will beagle bay for people. It’s really cute and she’s a sweet girl who deserves a good home," Stephanie said.