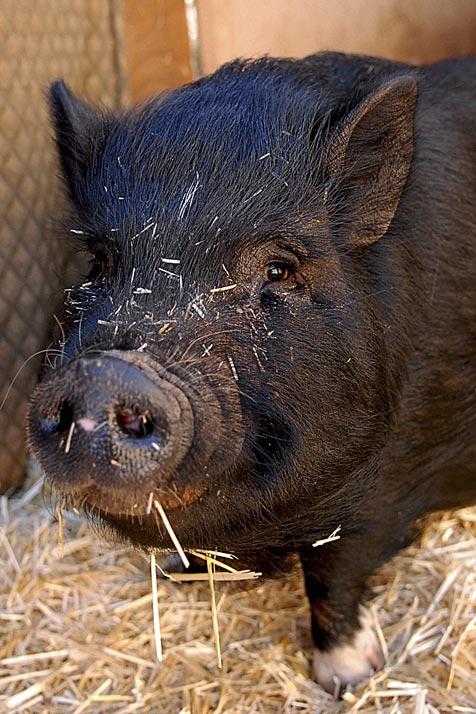 After a big surgery, there’s a magical moment that serves as a source of inspiration. It usually doesn’t come until many months of rehabilitation have passed, and more than a few colorful words have been mumbled in frustration. It’s the time when the patient finally feels better than he did before the surgery. For Pepper the pig, that day seems to have come at last.

Many of you might know Pepper, the now-retired Guardian Angel program pig. When she was young, Pepper injured her shoulder and messed up the growth plate. Things never lined up right afterward. What that translated to for poor Pepper was a life of arthritis. A life of pain, really, and she was a young pig when she came to Best Friends! The only solution was surgery.

Surgery, rehabilitation and hydrotherapy for a pig

The surgery went well, but rehab was tough and slow-going. Hydrotherapy at the Best Friends fitness center helped her find her stride, though, and soon Pepper was making steady progress. She retired from the Guardian Angel program (for animals with extra-special needs) once her surgery was successful and things were looking good. There was still a long road ahead, however. In fact, Pepper still has a long road ahead. But recently, Pepper did something that proved she’s getting there.

All along, after her hydro sessions, Pepper would get out of her crate and walk straight into her play area. The other day, though, she changed the routine a bit. She took a glance up the hill to where some other pigs hang out.

But the other day, Pepper squared her shoulders and hiked up there all on her own to say "hello" to her piggy friends. What a gal! Ever since then, she’s been a whole lot less grouchy, too — Pepper used to be quite the cranky lady. Adding all of the above into the equation, it’s safe to say at last that Pepper feels better than before the surgery, and life is only going to get better. Pepper says she’ll probably always rule out bungee jumping, but other than that, the sky’s the limit!

Care for animals like Pepper is made possible through your support. Thank you!

You can learn more about potbellied pigs and pig care by visiting our online resource library.